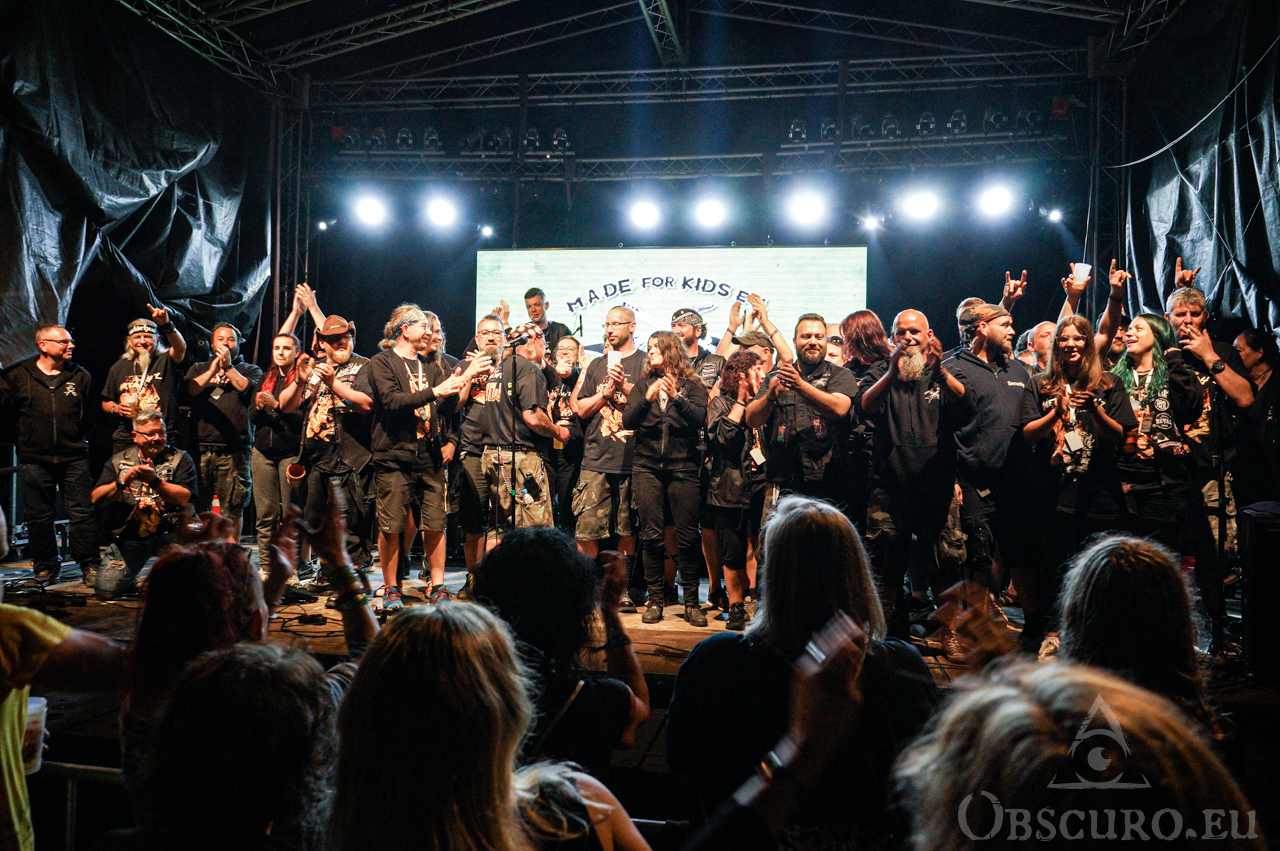 The People of Rock & Metal Day’z

While most visitors to concerts and festivals concentrate only on the obvious, the bands on stage, I often like to take a closer look behind the scenes. Who are the people working hard for our entertainment? We all know, it is not Pink, she is not there for your entertainment. What goes on backstage, who is in charge? How much work goes into a three days event? At least, who are those people who stand out in front of stage between the performer and the audience? Here is a little insight from the Rock & Metal Day’z, Whitsun 2022. 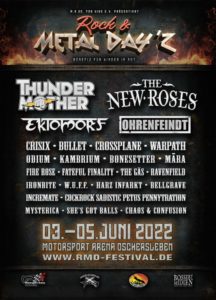 First of all, it is a charity festival of nonprofit association M.a.De. for Kids e. V. It donates all income from their events to projects as Elternhaus Magdeburg and other organizations which support kids with cancer or other diseases and their parents. I was made aware of them because one of my favourite bands Mara announced they would play there.

To cut a long story short, Cat Maverick and me, Friend.X aka Mr. Deep drove there to be warmly welcomed by Manja. She is in charge for Band reception and support. Here we see her with one of the earliest arriving bands She’s Got Balls. 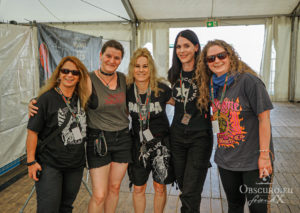 It is all about Organization

By the way, take a look at this flipchart and the paper sheets… Everybody in the team has a job to do, some even two or maybe three. An enormous number of people and a huge organization is required even for a small event! Do you want to count them? I stopped at number… 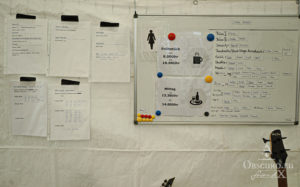 Have you seen the wall flyer? The members of Friday’s opening act Chaos & Confusion are the first to sign it. Compare it with the photo taken on Monday morning when every band has signed. It will one day go on auction to support one of the association’s projects.

And here we have Manja welcoming another arriving band. If I recognized the drummer and keyboardist correctly, they are Kambrium. Manja was busy, busy, busy 24/7 with bands, organizing their shuttles to the nearby hotel, taking care here and there but still found some time to watch a few bands. I don’t know where she got all the energy from. And she was not the only one in this case… They must be Duracell-Bunnies or VW-Beetles, running and running and running. 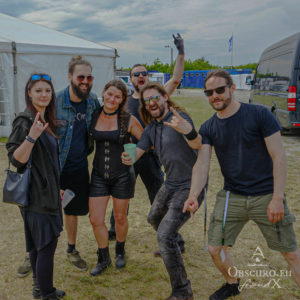 Let’s go on with two guys who should not be unknown to you, Andreas and Tom officially opening the Rock & Metal Dayz on Friday at 18:00 CET. They are the more prominent faces behind all the organization of the festival, present on the infield all day long. They are happy to have a talk and a beer, or both, with everyone but always on the observing side. 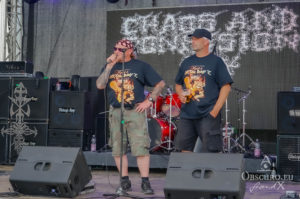 Masses are not Everything

And that’s how it started with Chaos & Confusion a few minutes later. You can have a lot of fun even with a few people as long as they are proper metal-heads. 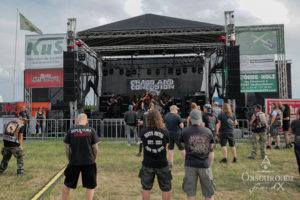 That’s what I call Sympathy

Before we continue with more personalities of the crew, let’s have a look at the folks of the audience. Can you see how much these two lunatics seem to love-hate each other? Of course, it is just for the fun of it. I love them both. They both were so unique!

And here we have the two guys with the maybe most difficult job of the whole festival. They were in charge for the stage techs, sound and light. They were the ones who take the blame if the sound wasn’t perfect or one of the spotlights dazzled someone. Dealing with trouble is their main job, remaining calm they solved them all, it was just a question of patience, time and stubbornness. I’m sorry, I can’t remember the guy behind the sound/light desk’s name but the other one, actually backstage and a bit more relaxed, is Hacki. Great job done!!!!

Inclusion is a big theme nowadays. Here we see a perfect sample how it should work. Joris has disabilities but he was so independent during these three days. I think he made a lot of new friends, and most important, it was just normal that he drove around unassisted in his wheelchair. It never took long and everyone treated him as an equal.

We remain with the spectators. You know, there are real guitars and air guitars. Neither are easy to play but it can work. What does not work out – at least for me – are those inflatable guitars. Their neck simply is not stiff enough for my strong hands. These two guys manage them much better. The third one demonstrates perfection on the air guitar instead. I salute all three them: cheers!

A Toast on Them

That’s the salute. On the side stands a cup of cola. Poor cup, all alone in front of the stage. Or is he just a bit shy joined the club of three beer cups? They won’t kill him; they welcome him as part of the gang. At least the cola is black enough. And Black Metal rules. 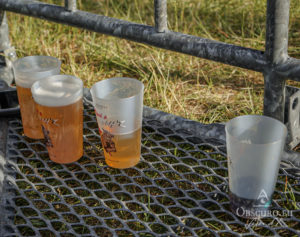 Enough joking around. Back to the serious side. Here we have Flo who not only is the vocalist of Mysterica but the stage manager of the Rock & Metal Dayz. Again one of those human dynamos… Busy all the time, calm and relaxed. Of course he needs to be in close contact with his techies, Manja and Andreas so here they are, all three of them.

Some metal-heads found time for a small mosh pit, some just ride on the back of their partners. That’s the Metal Way Of Life, what unites them is the pure fun and appetite for real, live music. And if you think, they are the only ones, just have a look at the crew of the barbeque. They are going crazy! That’s the metal way of table dancing! Great zest for life!

The guys of the festival’s merchandise stall are more relaxed. The bands would sell and sign their merch next to it. Pay attention to the bull riding flyer. The rodeo machine was extensively used not only by the audience. Some bands made use of it. Sadly, I missed to take photo or two but that might not have been a bad thing. Instead my buddy Cat Maverick caught Superman and Batman paying a visit.

Remember this guy and his lovely stinky finger? He is a nice guy. He just lives his dreams at festivals. Like so many of us he can be a little Mr. Jekyll or Dr. Hyde, decide yourself which one you prefer. He is the head of Sons Of Distortion Metalclub from Berlin. On the other photo we have another kind of son of distortion, one of the youngest spectators. Well done parents, of course his ears are well protected with a “Mickey Mouse”. Whenever you bring your kids to festivals or concerts, please take care for their eardrum. Once damaged it will never recover.

We come back to Andreas. After the slot of Crossplane he joins the stage, declaring he is a bit tipsy but happy and thanks them, especially Marcel for their great show and support. And of course he returns after the last headliner’s riffs to thank The New Roses. They have played a great show even though it was delayed due to unavoidable circumstances, well that happens and who cares if they were five minutes late. What would we do if we didn’t leave space for improvement?

All of Them AND Ute!

Time to thank everybody on the crew as well. Now you realize, how many helping hands were required. The stage fills, finally all are there but one! Ute! Where is Ute, Andreas’ wife? Ute! UTE! UTE!!! We all have to shout for her until she turns up quite impressed. Did I mention her famous vegan cheese sauce? I still have to ask her for the recipe! Mac ‘n’ Cheese ruled….

The Very Next Morning

What is the scene the following morning? The festival might be over but there is still work to be done. Get ready with a proper breakfast, a mug of hot black coffee and that’s it until next year. Same date, same place! It would take until Wednesday/Thursday until stage, rigs, stalls, tents, all surroundings are dismantled. Quite a lot of work leaves no space for sadness and After-The-Festival-Blues. 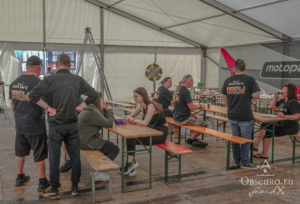 Now having a small look behind the curtain I am still missing these great people. They are a true family. And I need to apologize to those I did not mention so far, namely the glorious kitchen team who fed the crew all day long with their excellent selection of really proper dishes, prepared the buffets for the bands etc. I’ve also nearly forgotten the security-guys, the stewards at the shit ‘n’ shower station, etc., Thank You! Remember, they all work voluntarily for a nonprofit association. It is their hobby, their passion and their expression of The Metal Way Of Life. I wished, there were more enthusiasts and idealists like them on Mother Earth! 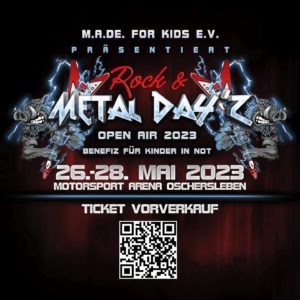 I am going to see all of them next year again, mark the date, it is worth it. Support those nonprofit organizations and small festivals as Rock and Metal Dayz whenever you can. Together with local and independant  bands and clubs, they are the core and heart of metal.

Please buy merch andphysical music or downloads from the bands official sources and don’t stream for free because it steals your artists’ income.