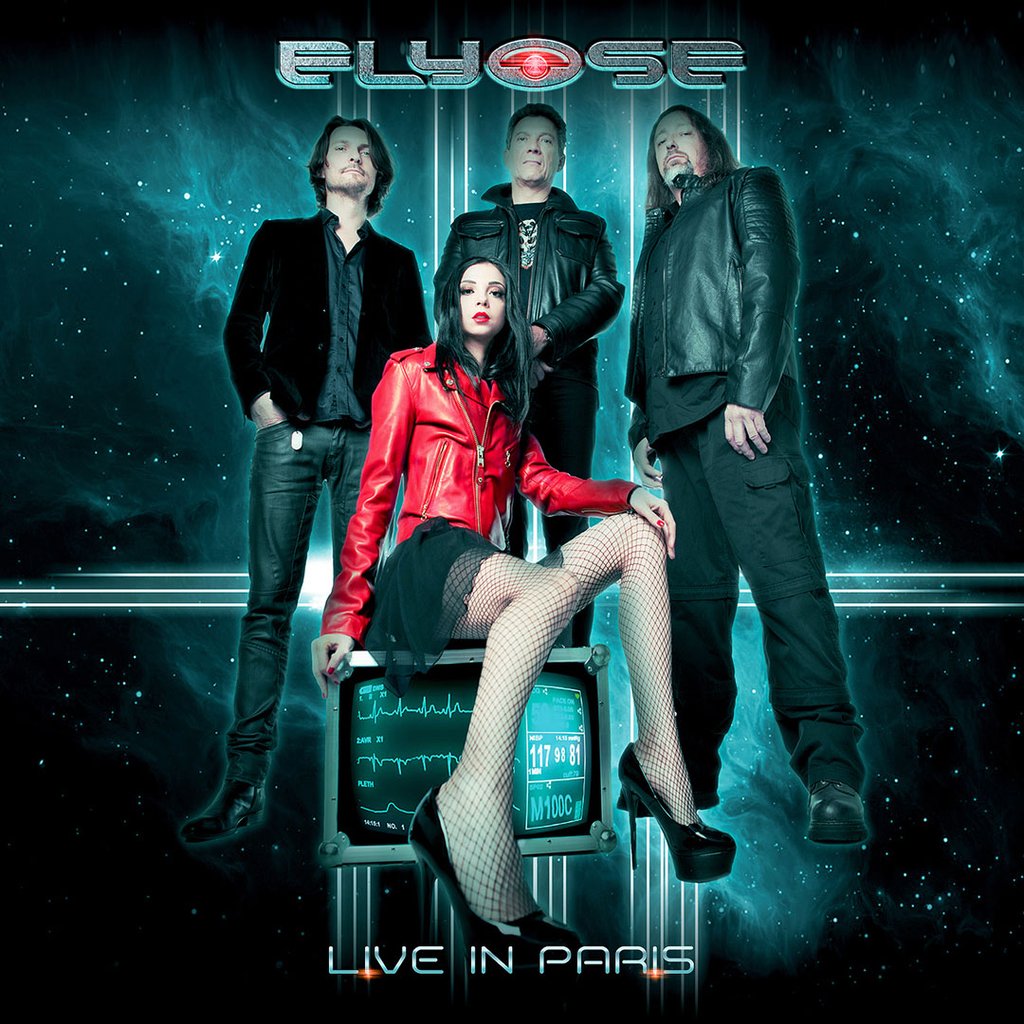 It seems to be a good tradition for some bands to close a circle of three to four studio albums with a live album.
I can think of KISS “Alive!” and “Alive II” in 1975 and 1977 on the spot.
Then there is Volbeat’s “Live From Beyond Hell/Above Heaven” about two and a half decade later to stabilize their status as THE live band of the decade.
Surely in between, I have 1983 release “Live from Earth” in mind, the legendary live album of “America’s new voice of Rock” Pat Benatar, recorded after four successful studio albums.
The last one leads me to Elyose’s “Live In Paris”, they have in common a great voice of their female singer, both classical vocal educated.
While Pat Benatar stopped her musical education after half a year, the singer of Elyose finished her studies at Conservatoire Paul Dukas in Paris.

Paris based Elyose was formed in 2009 by Ghislain Henry on bass and Justine Daaé on vocals. Later on, Marc De Lajoncquière on guitar and Patrick Kzu on drums joined. Their music and sound present the spearhead of France’ Nu-Industrial-Metal scene. They already released one EP and the mentioned three studio albums:
2009 “Théogyne EP”, 2012 “Théogyne full album”, 2015 “Ipso Facto”, 2018 “Reconnexion”

On January 20th 2019 Elyose recorded their show at La Boule Noir in Paris, a cozy club with a capacity of 200 spectators nearby Place Pigalle. Amongst others, it’s stage has hosted no less than international artists as Queens of Stone Age, Les Rita Mitsouko, Franz Ferdinand and even Metallica. Due to the Corona Pandemic, it is closed now as all other cultural establishments of its kind, so we really should hope for a re-opening soon.
Elyose decided not to stop with just recording the show but film it as well and present the album as a visual and acoustic package of the same length.
The album was mixed by well-known Marco Barusso who already worked for Lacuna Coil, 30 Seconds To Mars, H.I.M., etc.
Crowd funding and presales of several bundles helped Elyose to finally release the album a roughly one year later on January 31. 2020.

…kind of common for most bands, first the instrumentalists join the stage during the intro and with the first verses of the opener “Un Autre Été” Justine Daaé turns up.
She is dressed in a short but not too short leathery Little Black Dress (We bless Coco Chanel for inventing it) and looks as beautiful as always.
Beautiful is not only her outfit and look but also her clear voice, indeed well educated at Conservatoire Paul Dukas. Certainly, she is the star of the band, if not she IS the band.
Justine leads us through of set of a tad more than 70 minutes and 15 songs, a beautiful balance of not too many words in between the songs and no interaction with the audience. Professional on one side, warm hearted as the girl from next door on the other side. Frontmen and -women who waste half the show with endless talking instead of letting their music speak for itself could learn from her.

The stage light is a bit different than usual, each song is set under its own light, no overdose of lasers, flashes, super troopers, etc., just atmospheric layers of light. It fits perfectly to the songs.
The filming is done very relaxed, no hectic camera operator stumbling around on the stage to disturb and destroy the whole image. Filmed with steady cams from different angles gives it a very complete impression of the whole show and perfectly catches the intimate atmosphere of this club-gig.
The sound is very clear, transparent and authentic, you can hear every instrument and all vocals at their best. The noise, applause, singing along of the crowd is present all the time but not disturbing or interfering – Marco indeed has done a very good job.
Two guest singer take part, the first one is Aurel, singer of French Prog-Metal band Assent at “Mes 100 Ciels”, the fifth song, the second guest is Flo Lemonnier, singer and guitarist of Far Away, he mentions himself on Facebook as “Hi, I’m musician and scientist. I work on Antarctica as climatologist, and I’m in Far Away!”, so you also might have heard about him in a completely different context. He enters the stage first time for “Asymétrie” as you can see here.  and has the plaisier to sing six songs with Justine in a duet , I am very sure, plenty of male fans of the band would like to share this experience. I am lesser sure, their vocals would fit in as well as his growling. Well, both of them together make a very good couple on stage!
Although most of the songs are part of the 2018 studio album Reconnexion, about half of the songs belong to the previous albums, which makes a good mixture and review of the band’s history.

One Chapter Ends, Another Begins

Sadly, shortly after the release of “Live In Paris” rumors came up that there will be changes in the band. In May 2020, Justine confirmed that she and the other three musicians of Elyose would go separate ways in the future. The band is not disbanded though, however will only feature a new line-up around Justine , that is all.
Justine sees her career and future very serious as a full-time, full-hearted, and fully dedicated musician while Ghislan, Marc and Patrick didn’t quite seem to share this fully professional attitude and aim.
We can only hope, Justine will find the right musicians, ready to invest the same passion, time and professionalism as herself to fulfill their life dreams together.

Now, this album and concert video is a piece of history and closes the chapter of eleven years Elyose. As sad as it is, is it the starting point of something new – as we can expect from Justine and her future line-up of Elyose. Personally, I am very curious, some of the hints she is giving sometimes are very promising so far and a new studio album is already announced.
Therefore, if you ever wanted to own a piece of French Nu-Industrial Metal or like – I hate this phrase: – Female-Fronted Metal and outstanding vocal skills, this is the one piece, which is highly recommended.
You can get it in sevaral variations as CD only, with DVD, Blu-ray, only digital directly from the band’s webshop (here:)
Check out and listen to the studio albums as well and look at the other merch on offer there.