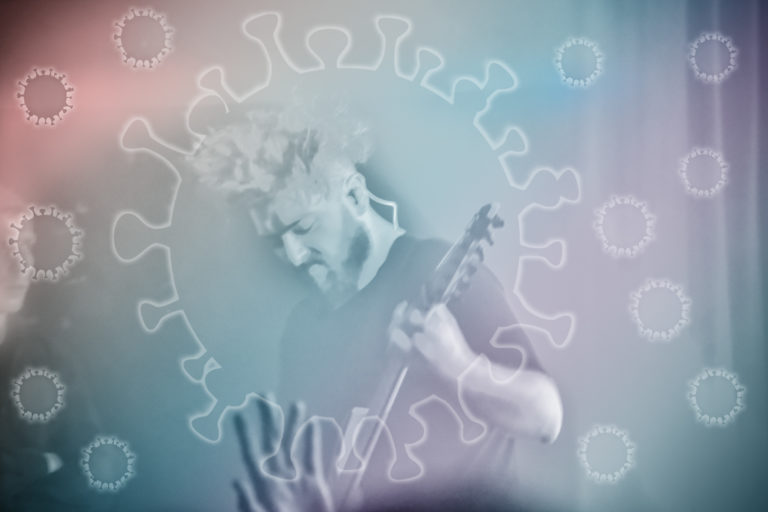 The pros for streaming shows are obvious: They provide an income and an opportunity to play for a large, even world-wide audience, plus social distance for the crowd by default. Now that the technical issues many of those had in the beginning have been sorted out, those shows will certainly remain a useful asset. In addition, many bands have resorted to various forms of crowd funding in order to fill the financial gap from canceling tours and festivals, at least partially.

A Tamed Crowd of Bench Potatoes

What was it like for musicians who are used to playing in front of an extremely active crowd to play in front of this ‘tamed ’ audience? “It turned out to be extremely entertaining after all”, Eugene sums up. “We enjoyed and every single person at those shows enjoyed it too. I got so many texts from fans showing their gratitude and appreciation and this is the best sign that we did right. We knew it would be different. Social distancing shows! We were ready for this. And honestly it felt awkward when playing the first gig. But it is better than nothing.” Eugene illustrates his experience and his appreciation of digital communication making up for the loss of stage-crowd and face-to-face interaction!

Raisa explains that both late-summer festivals did feel different, and even more precious. Everyone was living in the moment. She points out the extreme energy that came from stage, like it had been all saved up for too long in a weird sort of piggy bank. Bands like Fear of Domination and Bloodred Hourglass, who have a reputation of being very energetic on stage anyway, were bursting with even more power and liveliness.

Denise attended Haggard at Hellraiser in Leipzig and sums up: “Now there was simply space, no smell of sweat and no need to avoid long waiting before the ladies’ by sneaking to the men’s toilet.” Deeply fascinated, she speaks of Asis Nasseri (vocalist and spokesperson), expressing the band’s gratitude for the support from those present at the venue despite the situation. She says, “it felt way more personal as it had when there had been 1000 people instead of perhaps 80.” Micha who attended the same show says: “It was bizarre and yet real. It was a new experience but a good one in the end.” He is certain to attend more shows of that kind although he sees the immobility of the crowd a true loss.

“But we had some faith and now we know that it was worth doing it.” (Eugene Abdukhanov)

The situation is complex and requires some boldness, as Eugene explains: “It must be said that it was a huge risk from the financial point of view. Especially considering that in the best-case scenario the band would not earn much on six shows with limited capacity. Things could go wrong at any point.”

The festivals in Finland turned out to be the beginning of a short season for small festivals and concerts all over Europe. Each required immense effort to make it happen. The point is, it worked! These festivals and shows gave substantial evidence that the ‘new normal’ offers a slot even for such extreme shows like metal concerts.

“A true metal prince will come and wake the princess with a kiss”, had the black fairy said.

Any Show Is Better Than None

That said, a crowd sitting neatly while Tatiana, Eugene, Roman and Vlad shred the stage – honestly, it looks disconcerting. Digital shows possess a smaller financial risk, no doubt, but can neither make up the losses of venues and stage crews nor provide the interaction we all need so urgently. Eugene agrees: “People need live music even under current circumstances and musicians need to adapt to this. In fact I am surprised not to see more bands touring when actually they have a chance to do so. Yes, the risk of a financial loss is huge and it is safe to sit home play for the camera, but anyway, it is hard for me to understand.” Only last week, in demonstrations at Berlin’s Brandenburger Tor actors, artists and musicians complained about their hardships and not receiving appropriate financial compensation. They were able to set up a stage and gather a crowd but not to play music or theatre! Even protest could be a demonstration of art and creativity.

Allen: “I really do hope that bands here and abroad stop crying about how hard life is now after Covid.” Well, they have not and as matter of fact the pandemic is far from being over, unfortunately. The evil witch only waits for even the smallest chance to spread her curse again! Interestingly however, none of them at the Brandernburger Tor complained about the ignorance of the masses that lead to rising infections, which left governments all over no other option but to go on lockdown again. Politicians simply react. Blaming them alone is simply the wrong approach. The curse is brutal. Any hug, any time not wearing the mask properly, any transfer in a crowded bus, a n y exception from a n y b o d y supports nothing but the infection.

“ I think that it’s great that the people behind the curtain are protesting online and on the streets but we need more artists to play shows and to post about these shows and their experiences. This will help people trust again and will help us all have a better time in these dark, weird and scary times …”

Sleeping Beauty slept for what seemed an eternity, and no one lived to tell whether she and her prince really lived happily ever after! But together they shred the stage again!

The summer allowed us a short break. “I think everyone needs to accept that seated and distanced shows are going to be the new norm for a long time”, texts Sebastian. The shows that happened are beyond valuable, all the more as one after another country sees no alternative to going on lockdown again. They provided an as-good-as-can-be escape from the pandemic rule over our days. “I believe the music industry is really in danger of disappearing” , says Allen, “…. and will very quickly if we do not send a clear signal that they are bands that want/can tour under SAFE conditions but most importantly that there are fans that are craving Live Music again.” But too many carelessly or consciously ignored social distance – the best protection we have – and put the princess and all the kingdom back to sleep again. We can see in New Zealand, there was an opportunity to starve the virus. Now the infection, the evil witch’s curse, rules more than ever!

The Divine Departments for Miracles Have Seemed Rather Inactive Lately

One thing is for certain, we will not simply resume our normal way of life in 2021, not even if a vaccination granting complete immunity was available by the beginning of the year. Still, that would need to be produced and distributed. As a matter of fact, after ten months, researchers have learned a lot but not enough about the virus to rule it out. And we cannot rely on the divine departments for miracles obviously. Therefore, we are going to need more ideas to get bands and crowds together again, plus a ship load of courage to try them.

We should have learned by now how urgently we all need concerts and festivals to take place, and by that I mean with a crowd present at the venue! Culture and arts are soul food, which is just as essential as food filling our bellies, all the more so in such crisis!

The virus has outrun me too while writing this editorial. The dynamic of the infection has grown from “serious” to “most fearful”, exceeding what we experienced in spring, and that’s all over Europe! So apparently we will have to live with the prevalence of live streamed shows for quite some time. Honestly, we can only hope that there will not be a need for restrictions that exclude streaming shows again!

Thanks to anyone acting reasonable on and off stage, in the crowd, backstage and in management, but also in the administrations that are enabling us to learn that it can work!

And a most sarcastic thanks to the ignorant ego-bullies, whose irresponsible behavior limited this incredible opportunity for a short, late summer fairy tale!