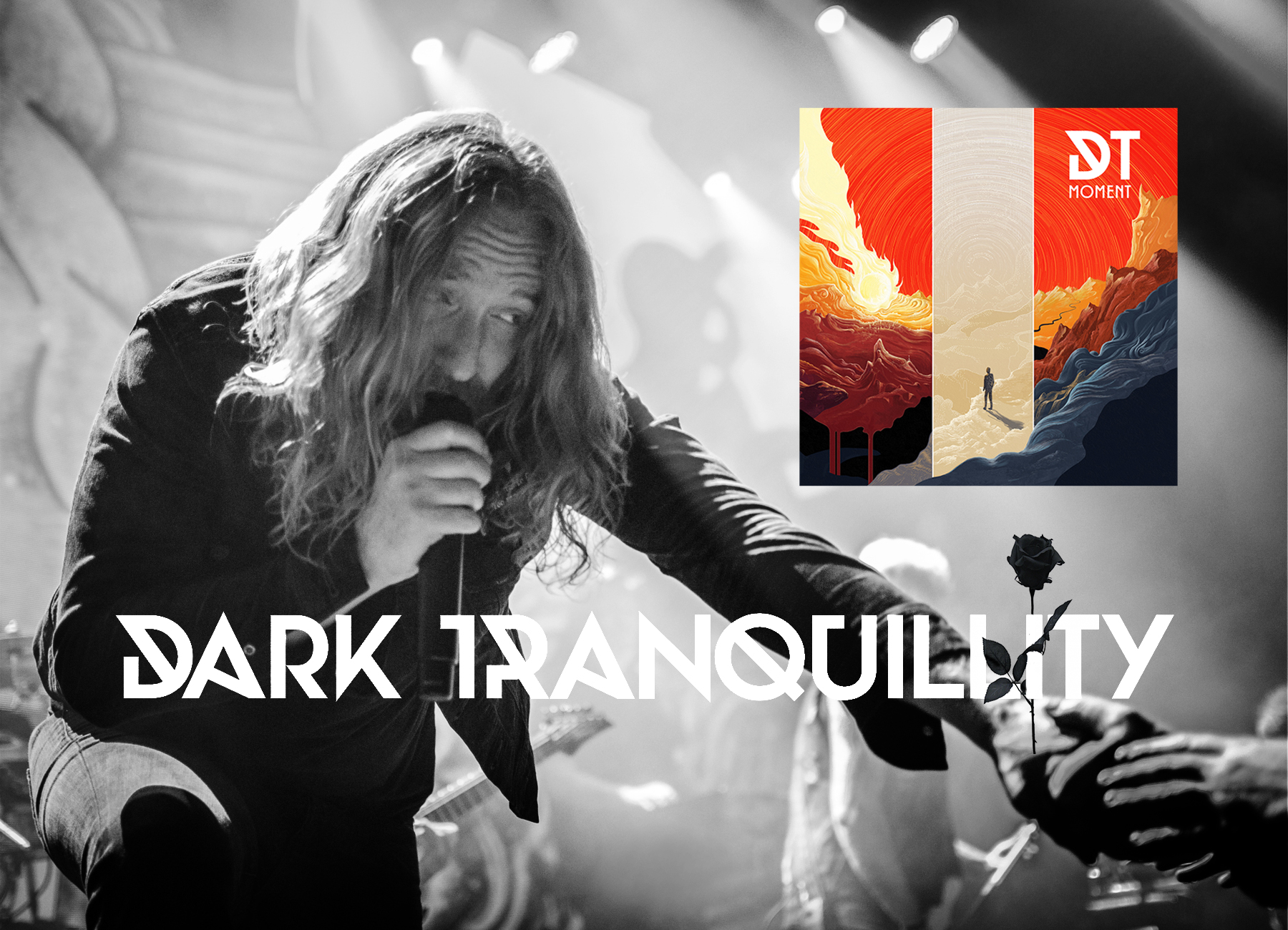 Releasing their album “Moment” today, Dark Tranquillity invited us to an online listening and q&a session some time ago. Raisa Krogerus attended the session on our behalf and reports: “The album comes with a kick-start and has some brilliant guitar solos. I loved the beautiful bass and was surprised by the clean vocals that come only later on the album. While the previous material was more driven by keyboard melodies, on “Moment” I found the guitars dominating. That’s where the new Amott-Reinholdz influences are clearer. I found more traditional Melo Death influences, like something old plus something new.” And really,

opens the album with a very inviting and most promising intro of gut-stirring keyboard lines and catchy riffs, captivating and never letting go!

Light and spherical soundscapes contrast to Stanne’s gloomy growls. The chorus repeats the captivating riffs of the intro but flowing into a fast sequence raising the tension of the song storyline. The bass in the background is a thunder announcing approach of the herald of bad news. An extensive guitar solo, lead by Reinholdz, adds the lighter side of the song, preparing for the grand finale, rising two steps upward to the sudden end.

All in all, a spectacular and worthy album intro after which 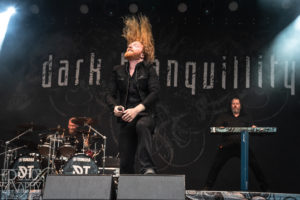 shines with keyboard tunes lightly rippling along like a small creek in contrast to the powerful darkness in the vocals and string work. Dark Tranquillity have often played with this contrast and mastered it. Even sharply contrasting elements in regard of their origin, atmosphere or speed are found neatly arranged around an incredible chorus, just like here, making it all a catchy yet multi-layered song.

Brandström‘s keyboard tunes usually mark the lighter side, contain the brighter sounds, and have found their niche not only as an atmospheric foundation of many songs, but also as spice adding rarely used elements. One such is a tribute to the good old Hammond sounds, well hidden in the depths of

Memories of the previous album “Atoma” rise with the first chord of the quick and rhythm-driven intro riff. All in all this song is perhaps the fastest song of the album and makes a perfect stage for Stanne’s disturbingly clear growls! There are few vocalists capable of expressing their lyrics in such harsh, dark, fearsome but yet clear and easy to understand manner! That said, the power of words is shattering and

when you are identical to none

meets the force of …. Gandalf standing on the bridge in Moria shouting like a thunder: “You shall not pass!”

Raisa reports: “Dark Tranquillity spend more time working on vocals and experimenting with them.” Evidence of Stanne proving the sensitivity his voice can deliver is to be found on

The chorus comes in soft clean vocals, sounding so fragile and melancholic and thus perfectly underlining the lyrics that give painfully vivid insights into a broken soul:

The middle part of the album is, metaphorically speaking, the soft core protected by the tough shell. If “The Unbroken Dark” proves Dark Tranquillity’s ability to transfer fragility, the next song addresses the eternal battle of hope and despair.

“Remain In The Unknown” 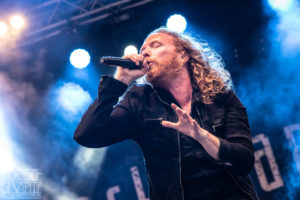 begins with a deeply melancholic intro, driven by soft clean vocals leading into the loneliness of the narrator’s mind. The song captivates you with perfectly set breaks in vocals, as much as with instrumental arrangements and lines. It works with contrasts of a rising tune in the moment of breaking from those soft to dark harsh vocals, which resemble the highly delicate web of processes illustrated in the lyrics.

Brilliance comes when instrumental and vocal arrangements, tunes and lines, and finally the content of the lyrics, coalesce to form a deeper meaning. Remain In The Unknown is such pure brilliance! The narrator is exploring how hope and knowledge come to be, not from a far too common external perspective, but from an emotional and internal one. Stanne expresses in a very melancholic manner these mechanisms work at same time identically and yet highly individually in each of us.

The song leaves hardly any space for doubting that hope, at it’s core, is nothing more than a denial of bitter endings. Here, at this very point, is the magic moment when the words end but the instrumentals continue the words non-verbally.

There is an unsaid “please,” before

let it be revelation

followed by the certainty dictating that a bitter end is the more likely one – by far.

Exploring the depth of a mind struggling with an unnamed threat, “Remain In The Unknown” pictures the many thoughts and emotions we go through in mentally dealing with such a situation. It illustrates what we think we know and where inside of us we search for reassurance, but find substantial doubt and uncertainty. As much as we long to know what lies ahead, it remains within the foggy sphere of the unknown until it happens.

““Moment” is the result of 2.5 to 3 years of work and exploring their style and sound anew”, reports Raisa. “Dark Tranquillity don’t even want to stick to something. They point out that the moment they stop experimenting and exploring, the creativity dies. Obviously, Johan was ‘stirring the pot’ with his new ideas, which was fun and good, as they say. But then he also needed to find his niche and get into the band’s ways of creating and what they want for their sound”, she learned on the pre-release session. Maybe

is a good example, and would by the way make a great soundtrack for a police series set in the 1980’s. There is a keyboard and piano intro flowing into a short, catchy riff, before the instrumentals open a slot with plenty of space for the vocals. Instrumentals and vocals are arranged in a balance that is not much on the metal side but heard more often lately. Similarly, is the balance of keyboards and strings. The drums in 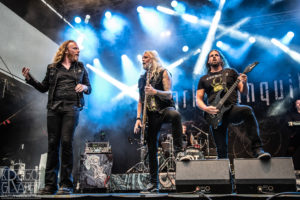 for example, leave no space for doubting the present set of songs to be clearly metal. Moreover, the various neatly arranged rhythms make sure that metal drumming 2020 exceeds the double and quad bass blasting, but still highlights aggression and evil in a song.

Once again, Dark Tranquillity presents us a set of songs challenging the limits of metal, only to push them further. They arrange Black Metal-ish and classic old-school Death Metal riffs with 80’s keyboard tunes, often touching the realms of New Wave and industrial soundscapes, as created originally by Depeche Mode.

Raisa shares my impression and took her chance to ask the band if they have been influenced by Depeche Mode, and they confirmed! “All but surprisingly, Martin was the one who claimed the responsibility straight away, but Stanne and Jivarp joined readily, reminding that EVERYONE must have listened to DM. They were surprised about that notion though, but not at all ashamed to admit.”

A result such as

“A Drawn Out Exit”

could easily make a soundscape for one of those horribly gut stirring Scandinavian crime movies; a song with an atmosphere that sends shivers up your spine: dark, harsh, heavy and dirty. A similar atmosphere follows in

“Eyes Of The World”

which has an intro that, style-wise begins in the “Atoma” days, only to push forward to the current state. The intro keyboard line reminds me of a sequence in Barren Earth’s song “Zeal”. Both cast the impression of a pan flute motif played on a 1980’s keyboard. The introductory harsh guitar riff paves the way for Black Metal-ish evil growls, that soon break into soft clean vocals followed by a distinctive break, where Amott leads an ambient solo supported by strong bass lines and framing drums.

With a good deal of freshness, beloved elements of their style and magnificent song writing merge into new songs. The new extent of the vocal variability ranges from an expression of evil in a Black Metal-ish style, to new wave-inspired melancholic clean vocals.

is an easy to approach mid-tempo song with a very catchy chorus. It clings to your mind just as the thought of things going south in a self-fulfilling prophecy. As such, it is one more brilliant sample for the musical translation of our living environment.

“Empires To The Lost” Refreshing and yet most familiar – the listener enters the “Empires To The Lost” through a portal of a solid, classical, 1980’s-inspired heavy metal sequence. Although it is one of the faster songs of the “Moment” album, and despite its lack of clean vocals, the song is perhaps the brightest of the album. It sets the final contrast to the most melancholic ballad

which is the last song of the album. Although perhaps unintended, the step from the first verse to the chorus comes with a full load of sadness, leading all the way back to those very roots of Metal that are found in Blues. The heavy load of dark emotionality is translated perfectly into this final guitar solo, arousing memories of Gary Moore’s “Still Got The Blues”.

Moments With The Smell Of Furnace

Dark Tranquillity has developed and established their style up to the level of a brand. “Moment” is unmistakable Dark Tranquillity from the first chord to the last drum beat. Their keyboard soundscapes are an essential part of their branding, and just as much a tribute to their inspiration. They are not but ashamed to present in plain daylight their admiration for Depeche Mode. I even dare say that on “Moment”, the spirit of songs like “Strangelove” or “Blasphemous Rumours” is translated into 2020 post-modern Death Metal. It’s a mix of light and spherical sounds with a low industrial echo – industrial meaning, sounds associated with metal industries, industrial facilities, and the smell of furnaces. Harmony in the contrast between harsh vocals and light keyboards, bridged by the catchy riffs and drums, proves their proficient song writing and arranging prowess.

But to me, very personally, the brilliance of the album lies in the synergy of lyrics and instrumentals.