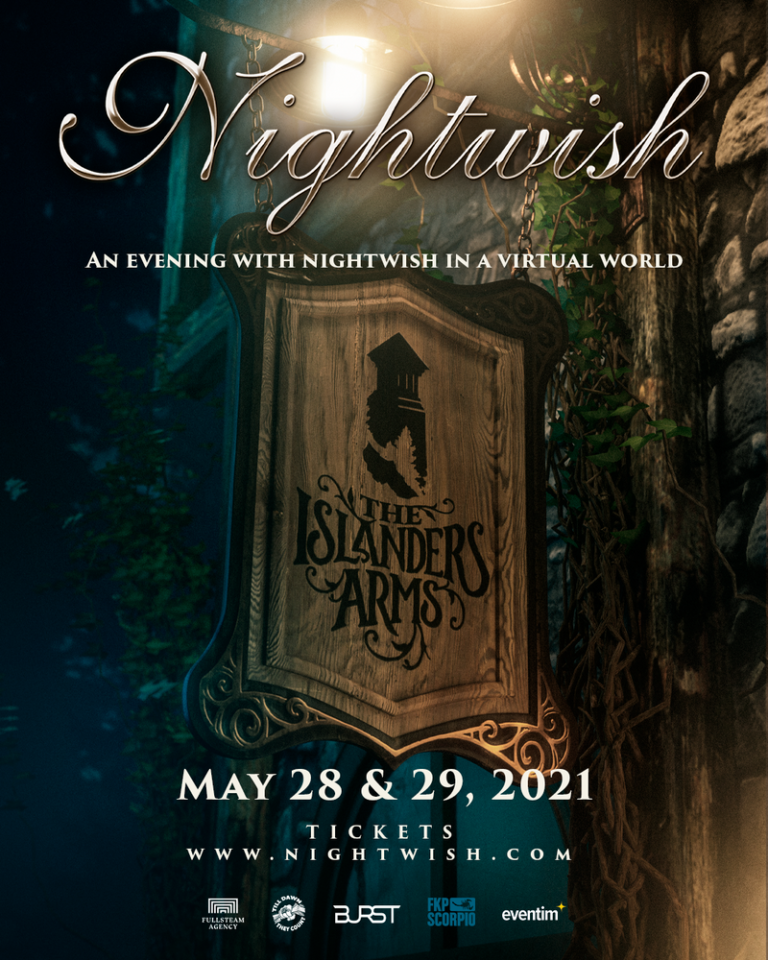 “Nightwish” needs no introduction whatsoever. Their music has touched the hearts of many over the years, and we the devoted fans were waiting with bated breath for their first Virtual Concert.

“An Evening with Nightwish in a Virtual World”

took place at the Islanders Arms, a tavern in Virtual Reality. Yes, you read that right.

If it sounds like something out of fiction, that is pretty much how it looked as well. Magical, surreal, immersive, and awe-inspiring visuals combined with well known and loved songs, carried by Floor Jansen’s majestic voice. It was not just your typical livestreamed concert. It was an entire sensory experience, one which many would love to see made into Blu-Ray so it can be enjoyed repeatedly.

A Journey Above The Clouds

The evening began when viewers were transported above the clouds via blimp to the tavern “The Islanders Arms”, which was at the edge of a cliff overlooking said clouds. These clouds were dense and being above them symbolized casting the cares of the world away to enjoy the show with fellow fans. We were treated to a seemingly endless lake of still lovely water, dotted with islands, and leading to a gently cascading, never ending waterfall. The tavern itself was adorably nested on its own island at the lake’s edge, with a rustic feel on the inside. Atop it was a bright rotating beacon, letting all know “We Are here, come join us!”.

Band members all seemed beyond joyful to finally be able to play for us again, especially in such a production, as it fit their music perfectly. They could be seen smiling and laughing throughout the show. Floor Jansen did not introduce each song as she typically would on stage. She did not need to do so either since we all know the songs. Instead, she alluded to the next song in fun ways that sometimes made me laugh. For 90 minutes, they serenaded us from the tavern’s stage under a floor to ceiling skylight. During all this, we were frequently treated to the breathtaking views outside as well. Mind you, breathtaking is an understatement. I do not have words to describe how lovely it all looked.

“The Greatest Show on Earth”

Each song on the setlist came with changes to the visuals and the background which fit with the theme of the song. Nightwish is known for having stunning visuals accompany their live performances, but this was on another level altogether because it was not just a stage. It was an entire world that changed for each song! Ever closed your eyes while listening to music and imagined something that suited the song? Well, that is exactly what they created. We saw flames outside during “Planet Hell”, grey skies during “Nemo”, snow during “Storytime”, lush green fields during “How’s The Harvest”, a lovely still ocean and dark night during “Sleeping Sun”, and blue skies with white fluffy clouds for “Ghost Love Score”. It all came together wonderfully, amounting to nothing less than a journey for the soul. This journey was spread out over two evenings, each with slight variations to the setlist. However, both shows contained the crowd favorites like “Ghost Love Score”, “Last Ride of the Day” and “The Greatest Show on Earth” to name a few.

A Warm Welcome To Jukka Koskinen

This event also celebrates and welcomes their session bassist for the upcoming world tour: Jukka Koskinen of “Wintersun”. Notably, this is also their first time doing songs from the “Human :II: Nature” album as well, though the setlist contained material from many albums. Jukka seems to fit in quite nicely with the band already and he was introduced during a virtual VIP session before the show. He clearly loves their music and enjoys being on stage with them, so I expect he will have a great time on tour with the band.

But as for the virtual evening, it is now over. “Ad Astra” was the last song, after which we were transported by the slow and steady blimp back into those dense clouds, on our way to reality once again. I am sure many fans watched the streams as much as they could during the subsequent forty-eight-hour period. I know I certainly did that before writing this. We all miss concerts, and I am sure the world will get back to those soon. Nightwish is kicking things off with their upcoming world tour after all. But until then, we can proudly shout