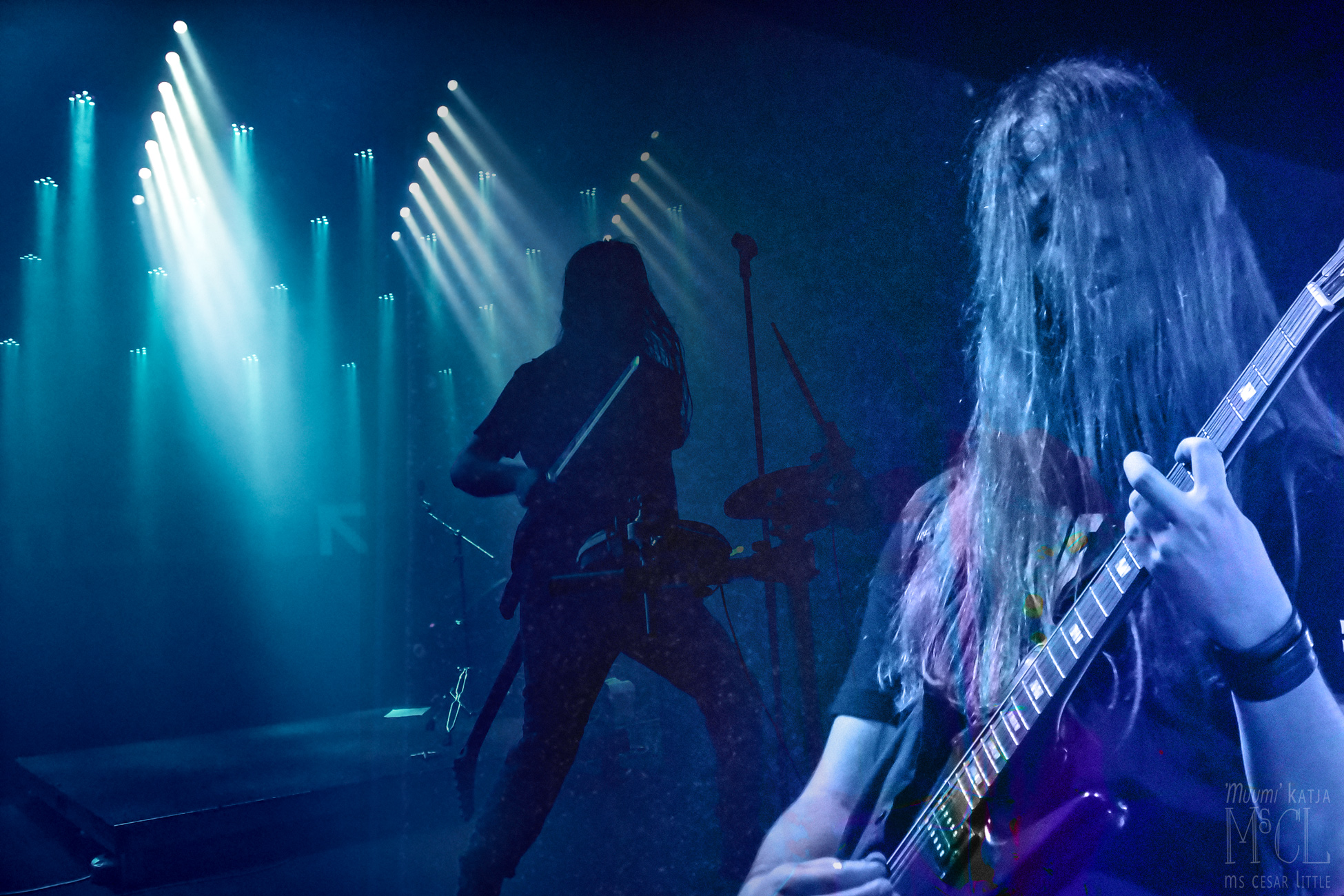 Battery. A simple word that comes with many associations like the Thrash metal classic “Battery” (by Metallica)? Or perhaps the legendary drummer ‘Battery’  better known as  Frost (aka Kjetil-Vidar Haraldstad, Satyricon/1349)? And of course, there is  the electric battery that keeps our beloved digital companions running. But what about the figurative battery in our souls – the mental battery that supplies us with ideas? Meet Míra Holly, the guitar battery.

Insanidroid is a Czech EBM/Industrial Synth Metal band from Plzeň. Their stage settings make a perfect frame for their gloomy tunes, heavy riffs and dark lyrics. Amon (Míra Holly) is Insanidroid’s guitarist, but also playing and composing beyond the borders of metaliverse. Recently, he has come up with a set of finest cinematic instrumental songs released under the alias of Míra Holly’s Synthweaver.

Metal is more than music although the music naturally is the knot connecting metalheads’ community. Nevertheless metal musicians have always been inspired from other genres and/or been actively playing and writing other music. It all goes back to the mysterious mental force called creativity.

So let’s begin with the one essential question on earth. Is there life before or even worse without coffee?

Míra: “Haha, no, I must admit that at least 50 % of what runs in my veins is definitely coffee, so my answer is: coffee is life, coffee is love.” 😃

I am trying hard let the caffeine in my veins not exceed the 25% share – really tough. So you have my sympathies! I wonder, however, what was first in your life: coffee, nature or the guitar?

Míra: “Well I would say that the very first was nature – When I was younger I used to live in a small town completely surrounded by woods on all sides, so that definitely left its mark. The second was the guitar somewhere around 8th grade on elementary school and coffee didn’t come into my life until high school, but it definitely stayed after that.”

Is there a relation between those basic elements?

Míra: “Well I would say that nature is one source of my happiness and inspiration, coffee is the fuel that keeps me going, and guitar is my way of chanelling the creativity into the world.” 😊

Creativity is the keyword.

I am curious to learn about how creativity works in you. It is individual, I learned. Someone said once, art is a matter of must about his creativity. So I wonder, perhaps there is “thing” illustrating your creativity. A well or stream, a character or creature from a legend, a mechanism or … I don’t know. Can you describe how it feels?

Míra: “I agree that it is very individual. I think that in my case creativity is like a battery, that keeps charging whenever I’m doing anything that I like – listening to music, talking to friends, being at concerts etc., and when this battery is “charged”, I feel the need to discharge it by writing music, jamming and doing creative stuff. So if there is any object to describe it, I see it as a battery. This is also why any time I finish a project, I feel the need to put everything down for a bit and recharge again.”

The battery is a very interesting image. Then again, a battery can overload as well. It might hurt when the discharging happens too quickly. Can you imagine to a point in life – or maybe you have experienced it already – when your battery is broken and will not provide more energy?

Míra: “Honestly, I feel like this battery is broken after every finished project. Every time I write a song and publish it I feel like there isn’t anything else in me and I always fear that the “recharging period” will never end. Very fortunately that didn’t happen yet. But I can definitely say that it’s a great fear of mine that this battery will not be able to provide any more energy one day. I hope that this’ll never happen.” 😃

A lot of the process is also jamming

It is a very mature point of view not to take such a precious gift for granted. How does your song writing work in more detail? You mentioned your inspiration comes from activities you enjoy. That seems to be sort of a spark.

Míra: “Yeah, definitely. Most of the time my inspiration comes out of nowhere. The first thing what I usually do is to turn on my looper and start to record really short loops to capture the idea as it’s still fresh in my mind. Once some basic idea is laid out I usually turn on the daw on my computer and start to re-record the parts that I like into some form of basic project, so I can re-arrange and edit as needed. A lot of the process is also jamming to the loops on guitar and just letting it flow through my mind until some more specific ideas appear.”

I suppose classical song structures are not really your piece of cake?

Míra: “Not really. I’m a self-taught musician, so I guess I’m looking at writing music a bit differently. It’s a lot about emotions and immediate ideas rather than pre-made structures.”

Self-taught? I had nearly forgotten when and why you began playing guitar.

Míra: “Yeah, I’ve started playing some 14 years ago, and almost by accident. My friend, who knew how to play guitar needed someone to play along with, and since we had an old acoustic guitar at home I started learning some basics and after a year or so we’ve started our first band together. I’ve been playing ever since.” 🙂

“Most of what I’ve learned came from YouTube tutorials and occasionally friends who showed my some technique or a little piece of theory.” 🙂

Have you ever had regular lessons with teachers or study at some sort of music school?

Mira: “My mom wanted me to start attending a music school at one point, but I felt like when I would have to do it I probably wouldn’t. So no, I’ve never been taught professionally. Which in retrospect was kinda a mistake, however I’m still proud that I’ve managed to do what I like regardless of education.”

I remember some other self-taught musicians mentioned that their technique did not really progress from a certain point on because for example their way of holding the pic (or sticks, heard that from a drummer too). It became a limiting factor. Have you similar experience?

Mira: “Yeah I agree with that. There is only so much one can learn by himself. And the skill ceiling is much lower because of that.”

“So for example on guitar I haven’t improved that much over the past few years, however, I took it as an opportunity to try out different instruments.” 🙂

The pic, the ceiling and the key

Have you found your way to push through the ceiling yet?

Mira: “Not really – I even considered finding a guitar teacher to help me find what I’m doing wrong and what I should learn specifically to improve.”

Aha! We’re approaching diversity. But, which instrument(s)? And have those competed with your passion for the guitar?

Mira: “Well since I wanted to make Synthwave, the obvious choice for me was to try to learn how to use synthesizers – both physical and virtual. So that’s what I’ve been learning for the past year.

And no, I wouldn’t say that these instruments compete – guitar is still the closest to my heart. But discovering completely new instruments definitely rekindled my passion for music in general.” 🙂

diversity in music is what makes it fun

Apparently diversity plays a remarkable role. And I learned again that there are very different approaches and ways to understand diversity even if the term is limited to music. How is yours?

Mira: “I think that diversity in music is what makes it fun. I was never a fan of sticking to just one thing and calling it a day. Specifically in music I really like to explore and find new things, whether we’re talking about genres or music instruments – more things = more fun!”

So what will come next? Trumpet and playing Jazz?

Mira: “Haha, close! In my latest song called “midnight rain”, I’ve tried using a virtual saxophone for the first time and I have to say that I absolutely adore the instrument. So who knows? Maybe one day I’ll buy a real one.” 😃

Playing and writing music is your way to express yourself, right? Or to express something that is in you and wants out.

Mira: Yeah, I want to say both. Sometimes it is just a way to express myself, other times it is to get out some feelings that I don’t want to hold in. Which was exactly the case with “Midnight Rain”. One thing that I really love is the traveling to shows on the highway. Getting out on the gas station to a cold, rainy night makes me feel really comfy and at peace. When I wrote the song I felt stressed, so I wrote this song which exactly reminded me of being on that highway and feeling good.”

So is diversity in the output the result or the cause?

Mira: “I think that the diversity is the result. It really reflect my current state of mind with every song.”

So as your mental/emotional states have a wide spectrum, your music has it, too.

An author but not a lyricist

How is your relation with language and words?

Míra: “In what way? Could you be a bit more specific?”

Katja: If I got it right you haven’t written any lyrics yet? Neither for Insanidroid nor Synthweaver. But apparently you are well able to express yourself in words even in a foreign language. That still makes no one automatically a lyricist or poet. And yet, how do you feel about expressing yourself in words or by writing lyrics/poems?

Mira: “Ah, yeah that’s true. Well oddly enough, I was able to write since forever (I’ve even written a few short stories and started to write a book at one point during high school), but I was never into poetry, nor into writing song lyrics. I wrote exactly one song (with lyrics) in my life, and that was a very cheesy and sappy breakup song during high school. 😃 But since then I’m leaving the lyrics to better writers than I am 🙂 And Synthweaver aims to be a completely instrumental project.”

I’d really love to hear that song, I think frowning. Never mind though.

not let themselves be stopped by fear of failure

As we all do hope this current situation will end the sooner the better I think we are entitled to daydream and send some wishes to the universe. What would be your wish for your bands or even future music projects?

This is generous and anthroposophical, even. Others had surely asked for material wealth or for popularity, success, something mostly for themselves. This however makes the final question a natural choice: what kind of superhero are you?

Míra: “I think that I would be Batman – a lot of gadgets, a cool Batcave, but underneath, just a regular human being.” 😊

Isn’t it an interesting, actually peaceful image? There is an invisible battery fuelled by coffee, sucking in impressions of quality time, turning this into tunes to let them flow out ot Mira’s thoughts into his hands on the strings? Actually the ‘Míra Battery’ seems a tad more complicated than on first sight. Or perhaps magical?  Peaceful, however, is a possibly only the outward appearance. When the fully-charged battery sends out all the impulses, a storm can rage creating a highly emotional piece of finest metal or synthwave in Míra’s case!