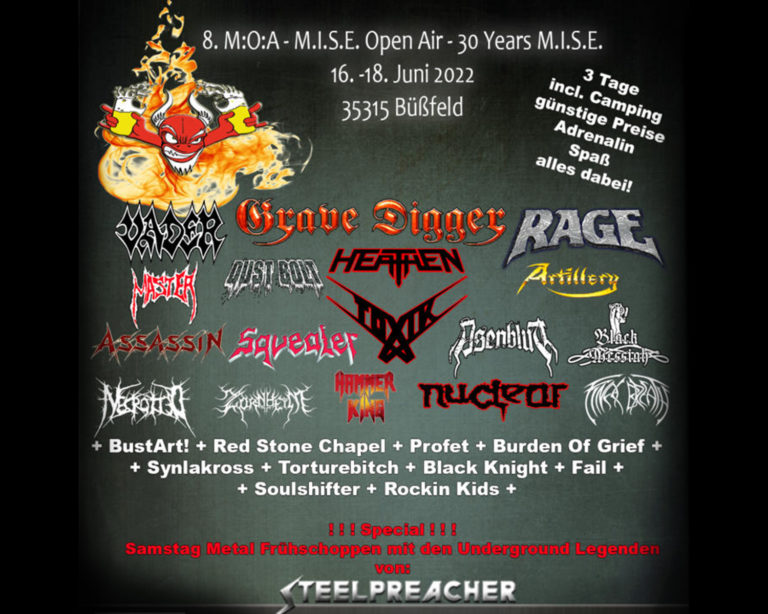 As the last chords of Rock am Ring/Rock am Park in Germany, the Rock Fest in Finland, and the Slam Dunk in England as well as many others still echo, it is clear: summer has come and finally a normal festival season kicked off. But the festivals don’t come as easy as we all longed for. The event industries faces new challenges. And there is a lot more going on in the world that we can only bear after a weekend filled with decent live metal on an actual outdoor festival stage. Welcome to the MISE Open Air 2022 (MOA) in Büßfeld/Germany June 16th – 18th.

Welcome to the Hinterlands

Two weeks from now the placid countryside of the middle Hessian hinterlands will be shaken hard by the loud shredding MISE Open Air (MOA) Festival in Büßfeld. I see international readers desperately fighting with the foreign spelling, let alone trying to read out loudly the name of the hosting village.  So let’s try that together: “ü” sounds like a very southern English ou in you. This weird third letter can be read like the sharp “s” in “bus”. Funny enough the name relates to an outdated German verb for penance or atone – the tasks we need to perform in order to receive forgiveness for our sins. Isn’t that the perfect spot for a metal festival? Actually it will be my first in Germany since the wicked virus put the world upside down. So I promise to celebrate every minute of the festival in solemn metal-inspired humbleness seeking forgiveness for my too long absence from the in-field?!

The ‘field of penance’ or Büßfeld has been continuously inhabited for at least 750 years, therefore made it through the plague waves and the endless war from 1618 to 1648 – both incidents erased thousands of villages from the map around here forever. Most likely the majority of today’s Büßfeld families have lived there already before WWI but had to consider moving for at least the past 50 years of decline in family-based agriculture and local businesses in the period of post-industrial globalisation and urban concentration of jobs and infrastructure. And yet, here they are, hosting the ‘wild’ metal community annually for approximately one decade.

Wacken spirit – on a microscopic scale

Living in Büßfeld means you will know all your fellow-Büßfeld citizens as there are approximately only 270. That’s what we call ‘like living behind the moon’ or really remote. With more than 1600 tickets pre-sold the festival will multiply the number citizens numerous times – a bit of Wacken spirit in a sort of microscopic scale.

With amazing headliners such as Grave Digger, Rage and Vader managing crew, namely the Heavy Metal Club MISE eV, will pull a decent crowd to cheer for the regional and local acts such as … For three days and nights metal will rule and echo over the fields and in the woods around. In front of the stage flying hair will rule, the audience flow in walls of death waving back and forth oil their vocal chords with hector litres of beer. – Just a normal metal festival to come.

And yet in the summer of 2022 quite many things are very different. ‘Really? Is this yet again about the fucking pandemic?! I thought this was over?’ – I hear your thoughts and believe me, I am just as sick and tired of it as you are. Tired – that’s just the keyword. Techies and roadies, stageheads and catering staff, they all were sick and tired of waiting for the horrors of the pandemic to end so they could finally make a living from their work again. As the horror stubbornly continued to return wave by wave, a large share of them lost faith in a future in the event industries or simply found another job to pay their rent and food; a job that will pay their rent even in the future covid variant-caused new waves of event cancellations.  ‘As the festivals and club gigs are finally taking place again, everything is fine again, right?’ – No. Not at all! I am speaking with Marco, from the MOA crew – accidentally just the day after their neighbours from “Rock Am Stück” cancelled with these dramatic words.

Like the entire industry, we at ROCK AM STÜCK were looking forward to live events finally being allowed to take place again on the normal, usual scale. Unfortunately, nothing is happening normally and as usual at the moment: there is no noticeable advance booking, we are far behind the required ticket numbers. In addition, the prices of the festival infrastructure are exploding with hefty price increases.

MOA-Marco points out their very fortunate situation. Their 2020 pre-sales were more than good and hardly any tickets were returned when the MOA could not take place. So they are extremely grateful to their loyal crowd on whom alone it is that there will be a MOA 2022. He has to point out, however, that there are difficulties of a kind they had never faced before. Setting up the entire festival in less than three months (since the governmental go for events came) is a major challenge but yet perhaps not the biggest obstacle in their way. Although their contractors largely intended stick to their commitments – given more than two years ago – in theory, practically too often this was simply not possible. No one can rent out or engage staff in a project that is not available anymore, neither employed nor employable as they changed into different sectors. Additionally the historic scale of inflation undermines any calculation that is based on figures that worked for past four decades but not for that past four months.

Events require insane amounts of energy on all levels

Although there are booking agencies, such as ITB which have come up with a sustainability concept in order to reduce the CO2 footprint of their events, any metal festival remains an energy-intensive matter. Electric energy needed for the PA and light on stage during the shows, of course, the endless amounts of water needed for the catering and sanitary facilities, plus the fuel for the transportation of equipment, installations, crew, artists and naturally the crowd and not to forget the insane pile of rubbish this all produces – also for example due to safety regulations that rule out the use of glass and earthenware. Each position has been subject to increasing prices by 8 to 40 % while the calculation of the income side might have estimated no more than perhaps 2 % inflation if at all. This hits all the festivals and the entire event industries. And while the larger and huge events might rely on the hidden investors who will now simply face smaller earnings, all the independent events are once more at stake. Some will make this year but never again. 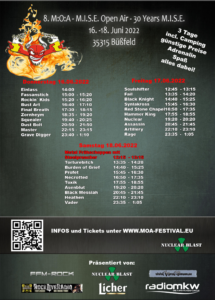 After all these depressing hard facts we need a decent helping from the metal plate. How about giving the bands of the MOA line up 2022 a spin? Let’s explore the running order and begin with “Sparehead” by Bust Art – the drum intro just makes the perfect opening, right?! Honestly, the MOA kicks off to quench our burning festival with a fucking decent brew. Thursday’s program cannot be missed! Once Final Breath set the mood for the harder stuff, Swedish Zornheym, who come with exDark-Funeral-bass-power, tear us into the infernal realm. My personal highlight will then hit the stage. Squealer. On the highway into the first night, Bavarian Thrash speeds up with Dust Bolt. Master is one of the bands can be understood one of the fundaments of Death Metal. Speckmann’s raw and sullen soundscapes mark a sharp contrast to the bright atmosphere of Power Metallish very popular releases of Grave Digger. But perhaps they will furiously close the first day’s program with their more back-to-their-Thrash-roots 2021-album songs although the setlist of their recent gig at the Rock Hard promises otherwise.

Sleeping long on Friday will not work. Soulshifter from Dillenburg will give a dark the first ring of the waking call, Fail end the first snooze and finally Black Knight tear us out of our sleeping backs. There are too few women on stage in metal. Still. But Spanish death/gothic metallists from Synlakross come with a shining emerald! Patricia can’t be missed! With Red Stone Chapel a local act adds some blues, beer and bbq-driven sounds to the fever graph. Hammer King speed up with some fantasy-power-metallish riffs before the fever gets delirious with Chilean Thrash from Nuclear. There is more Thrash to come from Assassasin. Fun Fact: ‘Assassin’ is a really popular metal band name. You will find a long list of bands especially from the 1980s and 1990s. Then again: most of them split up after (very) few years – assassined, ha ha or changed their names as there were already the Teutonic Assassins we are going to experience on the ‘field of penance’ – how fitting. ‘Artillery’ is or was just as popular a band name as Assassin. And just like them there can be only one true Artillery, of course. The Danes will prepare the stage for Friday’s headliner: Rage!

Saturday, final MOA festival day and after two nights of heavy metal celebrations, a heavy wake-up call is desperately needed. The ‘Grünberger Jungs’ from Torturebitch will deliver with a good deal of self-irony. The snooze ends abrupt with Burden Of Grief. I yet have to make up my mind how death metal a drummer nicknamed Knuffi can be. ‘Knuffi’, that is a bit like fluffy. Well, we all know how even most infernally black-metallish fluffy can be. Profet also come with a female guitarist – I can’t wait to see Lise shred the stage! Necrotted take over before with Toxik some true veterans from the 1980s once more rule the stage. Asenblut and Black Messiah promote German lyrics.

At this point I have to admit that war and honour-related lyrics which of course are very popular in several metal genres, fail to attract me. Quite the opposite. War never leads to honour but bloodshed and grief for nothing. I have never understood the heroic part in being send to slaughter foreigners just because some superior freak takes his honour violated. With an unjustifiable invasion war at our doorstep among all the other challenges humanity is facing and very likely to fail we better focused on whatever uniting power there may be.

Heathen’s “Empire Of The Blind” casts a bitter but welcome view on the results of egocentric populism. Perhaps the recent course of events lets Vader see some of their earlier releases from a new perspective? They however mark the grande finale of the MOA 2022!

Let the party begin, hope for pleasant weather and three days full with metal to forget about the world and simply celebrate life.