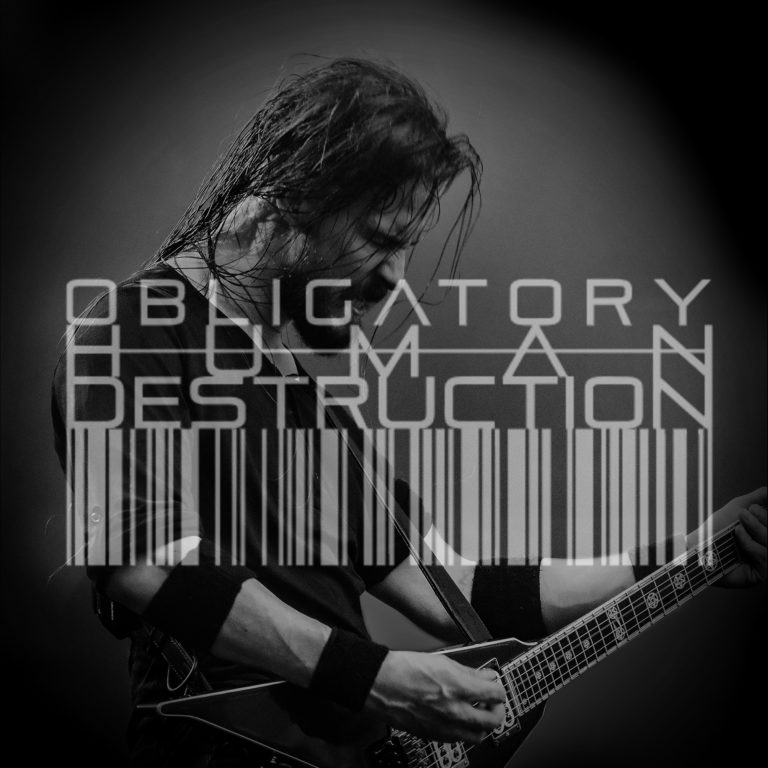 Mika Lammassaari: “I Had To Find That Lyricist In Me”

– The Birth Of Obligatory Human Desctruction

Mika Lammassaari, known from Mors Subita, Eternal Tears of Sorrow and Wolfheart, is about to release his solo album: Obligatory Human Destruction. He released the first single, named “Cancer”, already some time back. Is this song his way of processing his father’s death, I wondered?

Previously … I read Mika’s release message and click on the link. While the music plays my thoughts wander back to meeting Mika at Nummirock 2018. We spoke of how aggression – more so in music – can be an expression for many diverse emotions; positive as well as negative. But “Cancer” is such a raw and brutal song that I doubt it reflects anything positive, even less thinking of my own cancer experience. The title points to Mika’s father’s death, but also to my own fate.

I replay the video and this time I follow the lyrics. It leaves me stunned.

“I spread inside, invade your flesh and mind;
I am the disease …” (from “Cancer”)

The lyrics begin and illustrate a demon growing inside a person with the sole aim of killing in the most tormenting way. Following the video I can feel the demonic tumour and the sarcastic pleasure it takes in torturing and killing, despite any hope and any attempt to stop it.

Harsh vocals, riffs and drums make the song a loud and brutal wall, just like the demon’s dominance and superiority. The tumour demon manipulates. It sucks all energy, all life. As such, it’s easy to miss the finer details of the song, such as the 18-second classical guitar solo revealing Mika’s amazing talent and expertise in string wizardry. The solo feels like life. Dramatically, life has no choice but to wither in this destructive thunderstorm. The song-writing and arrangement perfectly add to the musical illustration of this horrific battle against pain beyond words of a person reduced to a pitiable victim with a torment-enslaved mind.

Thus far, I was lucky enough to evade the cancer-induced pain and spasms that occupy so much of the lyrics. Nevertheless Mika’s words match my own experience, so I felt the urge to speak with him …

… and due to the topic, it was impossible to leave out my personal experience with it. Then again, for Mika the project became as personal as can be: “But looking back at all the lyrics, and all the music, you can really, or I can really see all the songs relating to my father in some sort of way. So that’s really sort of a catharsis piece that album, for me dealing with the passing of my father.”

Mika wanted the song – and yes there is a complete album waiting for release – to have a particular soundscape: “So anyways it’s not gonna sound like a machine gun, but machine-like. It must be like this, this fast music. I sort of of just thought that maybe I can make it work with this sound. And in the end I really think that everything worked out.”

“I was searching for a band!”

When Mika released “Cancer”, he wrote about his idea of the project in a way that pinpointed to realising a solo project, however, he explains: “I was searching for a band! I had a drummer in mind who I wanted to play on the album. I had a bass player who I really wanted to play on the album. But the problem is that I don’t want that band to hinder Mors Subita.” – Mors Subita has always been – musically speaking – his top priority. He’d rather not get his bandmates there into time or loyalty conflicts. Mika found himself facing the challenge of wanting a band while being unable to find the musicians to form it – not at that moment anyway. Thus, a solo project was born, at least for the time being. “But when we were going to shoot that first music video, the actual music video where there should be a band, I decided to ask a couple of my good friends …” Mika notices me laughing and apparently, we have the same thought. So he continues laughing himself now: “I am not gonna do that thing where I play everything myself!” He tries in vain to word a reason before giving up.

“Is this the perfectionist in you? It seems you don’t consider your skills in the instruments – besides guitar of course – to be adequate for such a video?” – “Yeeeeaahhh, no. I think the Finnish, the Northern Finnish mentality anyways is like, it would come across as a ‘look-what-I-can-do’ sort of thing!” He alters his voice as if different people were speaking: “Like, ‘Look at me, I can do it all myself’ – I don’t wanna do that! Because the main idea from the birth of this project was that I wanna have a band! And so in the music video at least, I will have a band perform these songs, regardless of who played them on the album. I don’t really care who played them. Too bad it had to be me but again, that was a sort of compromise!”

Creativity can be a double-edged sword. On the one hand it can be extremely helpful to process hardships – we shall speak a bit later of this. But on the other hand, for example when it is blocked, it can become rather destructive. It can be a force that, like a water, is going to find its way out. Mika had two competing urges driving him. One was getting the music done and the other was to form a band for this music. Since establishing a band turned out to be a bit tricky, he decided to focus on the music.

The second single (video release) is “Holy Man” and will hopefully be released soon. In my mind’s eye, I picture the setting of an execution or, to give a more religiously inspired image: judgment day. My childhood best friend’s grandfather was a sort of grandfather to me too. He was an emotional and very warm-hearted man. But when he fought his final battle against his cancer, he hallucinated being a young soldier in World War II again. He committed horrible war crimes, crimes none of us ever thought him capable of. “Holy Man” wakes this memory and provides a perfect musical frame for it. The man in the lyrics faces his judgment day, is about to pay for his sins, and is forced by the darkness to reveal his crimes and lies. He will then receive divine forgiveness. Spectacular!

Speaking of the music, it kicks off catchy and tempting. It is the song I cannot get my mind away from. It echoes in my ears for hours after listening. The beat ties me up, the guitars stir my guts and the keys entangle my insides. And then there are these vocals – damnation and blame. Horrific and amazing!

“Of course, the emotion is first”

There has been no release date set yet. But Mika revealed some insights on how the album came to be: “Mostly, what I meant by that statement was that OHD had to kind of sound like a machine. It had to sound … how should I put it? – Ah ….” He bites his lips thinking. “Of course, the emotion is first, but coming from a totally different place because I have always done melodic music. And I wanted to …, I wanted to have sort a different perspective, putting all the feelings I had now on the table.” Mika is really fighting to word his emotions here.

How a person experiences cancer varies widely from individual to individual. There is cancer that comes and goes (with a tiny cut) nearly unnoticed, although it might still be deadly, such as some types of skin cancer. Others demand a torture-like, nearly fatal treatment even though the tumour was hardly noticed. And then there are battles of doom, sucking all energy, filled with endless and extreme pain, spasms and sorrow beyond imagination. Naturally there is space for all sorts of mixes and shades in-between. Mika’s lyrics describe the latter and wording all this was more than a challenge: “I don’t really like to write lyrics. I know that musically when we were talking about this sort of aggressive style, I know how the vocal should sounds in a musical piece but then again I am not really a lyricist. But I had to find the lyricist in me for that album. I sort of found a channel for my own … hm … it was an outlet at that time.“

Our conversation went on much longer. There are more tales to be told another day and some will remain between us. I am eagerly looking forward to discussing the entire album Obligatory Human Destruction so I can add more of our very deep chat. Thank you, Mika, for these songs and your faith!