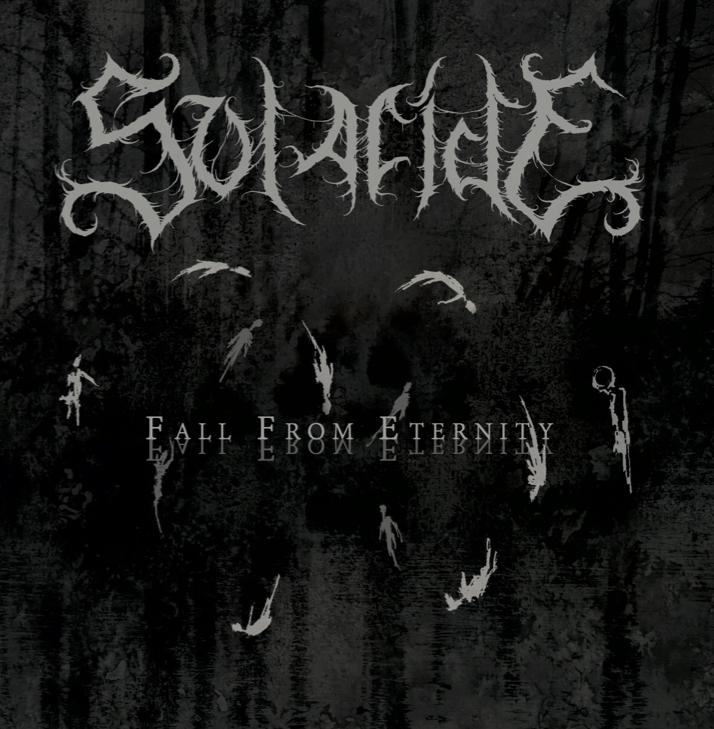 The Finnish band Solacide released their new album “Fall From Eternity” in late September 2021. Although the band was founded in 2004, this seven-song piece is only their second full-length album. The first, “The Finish Line” was released in 2017. Although, as their label describes the album as strictly Black Metal, there is a lot more to “Fall From Eternity”. It is reflecting and progressing Solacide’s musical evolution in a diverse manner. The obvious strength of either Solacide and/or their new album is the impressive atmosphere of severe discomfort, from blasting drums framing the diverse sounds to progressive guitars and infernal vocals.

The infernal storm of drums and guitars kicking off the first and title track “Fall From Eternity”, resuming perfectly the gloomy soundscapes of “The Finish Line”. The first half of the song cheats me into expecting the album would follow this ‘hell-cut-loose’ path. Then there is a break followed by a short intermezzo, suggesting I might be tricked. The lead guitar from there on triggers a memory which will reappear several times again during the album. It is the memory of good old Diablo™. Yes, exactly the old MMO game all the way back from the 1990’s. The tunes and atmosphere of the lead guitar makes me see my sorcerer down in the lower floors when the thread must be waiting for me behind the next door. Musically – it is some sort of seductive threat.  The staccato style drums are very demanding to listen to, the sound like a metronome on ecstasy but you get used to them with the length of the song. They indeed fit very well with the vocals which sort of speak for themselves and perfectly describe the reputation of the Finnish soul.

Its intro reminds me strongly of passages found on “The Finish Line”. Characteristic hammering beats of incredible speed lay the carpet for much softer and often even remarkably slow string tunes. This intro is quite similar to the intro of the title track, but meaner in terms of the vocals. In the middle part of the song something entirely unexpected happens. The lead guitar surprises with a Waltz rhythm. Choral chorus vocals add a ritual atmosphere. And then there is another Diablo ™ memory triggered by a sweet acoustic guitar. The memorized setting is all but sweet as it sculpts the moment of peace up in the village just before (re-)entering the vaults. It takes quite some finesse to create such a mean death-approaching, mood-moving atmosphere with such soft and sweet means.

follows so quickly and connects so seamlessly to the previous track that it feels a bit like its outro. The long mostly dual guitar acoustic part comes as a relief or perhaps more a surrender to the unbeatable force faced just before. I could even imagine an orchestral version of this acoustic instrumental, with harps, violins and cellos before the roughness explodes with the next song. The album up to here is fabulous as is “Oblivion”. The song is short, barely half the time of the first two songs. This set of three songs makes a perfect package. Their plots add to a story resembling the soundtrack of the story they trigger in the listener’s mind. Perhaps a classical fantasy story about dragons, trolls and ogers and of course, the heroic knight and the princess. But they lose in my mind as death stalks them.

begins quite groovy in a way, the air of betraying sweetness remains and finds continuation in some acoustic guitar lines. Very melodic, some riffs in classical heavy metal style plus background chorals echoing. Plot and atmosphere of the song could easily rouse a Viking warrior to immediately enter a ship and go for a raid against Irish cloisters. “Far From Reality” resumes where “Oblivion” ends, almost like a part two of a tale. It is a fantastic song with some rather brutal changes and interruptions. Those tear the listener out of the daydreaming previously triggered by the acoustic lines.

continues the staccato of drums but suddenly they pick up speed like they are overtaking themselves. They are underlined with a neat lead guitar line and harsh, not too aggressive vocals. They are still brutal enough to keep your attention high and awake forever or, to keep the Viking rowing – sticking with the imagery of the previous paragraph.

remains as a short acoustic intermezzo before the highlight of the album follows. As the name of the song suggests, it makes a perfect break to reset one’s mind for what is to come, connecting to the Viking scenario: Spirit Hibernation is the dawn of the battle or raid. Mantra-like, the riff repeats and repeats this one motif that is calming, reassuring and agitating in the same moment. It fades with the setting sun as the nightly raid begins with

Doom is approaching with this very low intro full of atmosphere determining bass lines. Diverse in plot, instrumentals as well as vocally stylistic means. The absolute highlight. More than ten minutes long, it should not end, it should go on forever. The atmospheres of a single passage can even be opposing. The lead guitar comes with some lightness while the supporting rhythm guitar and bass send you to hell. And finally, the bass player reveals his full potential if only in the proggy basslines, especially in the chorus! And finally, some slower drums which is much more of a challenge to play than sheer speed. A song that should never end! “Away From Light” tells the final chapters of the Viking’s raid. Battle-lit fast parts, thoughtful and heavy intermezzos, lightness of the mead-dizzied mind in the acoustics, and in the final chapter there is peace found in hallucinating pain caused by fatal wounds. He is on his final journey, the one that takes him to Valhalla.

An Immense World Of Delight (William Blake in “Forsaken By Gods”)

All songs were written by Solacide, namely Kimmo Korhonen and Henri Sinokki (“Far Beyond Reality” and “Away From Light”).  The band further consists of vocalist Iiro Juntunen and drummer Matthi Jauhola. After the recording was finished, Henri changed from playing the bass to become the second guitarist. Sami Heinonen joined the band as new bass player.

Kimmo used to be the band’s sole composer on the previous releases. I am happy to see Henri revealing his potential beyond being a virtuous instrumentalist by being a strong second songwriter, too. Their coalition apparently formed a joint creative force pushing forward the band’s overall musical evolution.

I Wish To Dream For A Lifetime (“Forsaken By Gods”)

Kimmo is also the band’s lyricist, strong in letter-painting dark sceneries describing the everlasting fight with our inner demons. The image he creates also invites you to explore fantasy realms or gloomy historic settings. The quotes (in “Forsaken By God” and “Away From Light”) from Fulke Greville (1554 – 1606) and William Blake (1757 – 1827) perfectly match and highlight those images. It is very tempting to project his words onto a fantasy setting.

From The Unknown (“Fall From Eternity”)

Perhaps Solacide is not too popular so let’s introduce them in more detail. In 1996, Matti and Kimmo founded their band and renamed it in 2004 to Solacide. They have remained the band’s core ever since. Kimmo has played in many bands such as Amberian Dawn and Waltari, where in the beginning he stood in for Sami Yli-Sirniö (Kreator). Kimmo’s passion for Iron Maiden led him to Maiden Hell where he has played with Henri before the bass player joined Solacide.

Solacide traditionally produce their releases themselves although they are well connected within the Finnish metal scene. With the new album “Fall From Eternity”, they entrusted Emil Pohjalainen (best known from Amberian Dawn) with the mixing while “The Finish Line” was mixed by Juho Räihä (Soundspiral Studios), who is not only a well-known producer but also an amazing guitarist playing with Swallow The Sun. Additional keyboard passages on “Fall From Eternity” were played by Janne Immonen (Ajattara, exWaltari) and additional vocals provided by Henry Hämäläinen (Shade Empire).

The album “Fall From Eternity” is the soundtrack for dark mystic stories to pop up in the listener’s mind. Lyrics and soundscapes could even make it a concept album, as the lyrics can be easily understood to display the thoughts and inner fights of the main characters of a dark and mystic fantasy story. More so because of the quotes from Blake and Greville. As much as I love the idea of a fantasy story/game soundtrack, the darkness, suffering and temptation to pursue this final journey is a universal motif I have been well acquainted with. So, I’d rather not limit the album to the level of a fantasy soundtrack when it offers so much space for individual association and personal identification, even if those might inspire one to write a fantasy saga.

“Fall From Eternity” is inspirational, deep, and diverse. There isn’t much space left to top the acoustic guitars, gloomy atmosphere resulting from sweet sounds and multi-layer arrangements. The perfect balance of coherence and stylistic evolution finds its final expression in the perfect order of the songs. Perfectly the next song resumes the atmosphere or means of the previous, but only to independently follow its own plot from there on. A fantastic album, that’s what it is.

online and
get their music and merch

Thank you Friend X for co-writing.