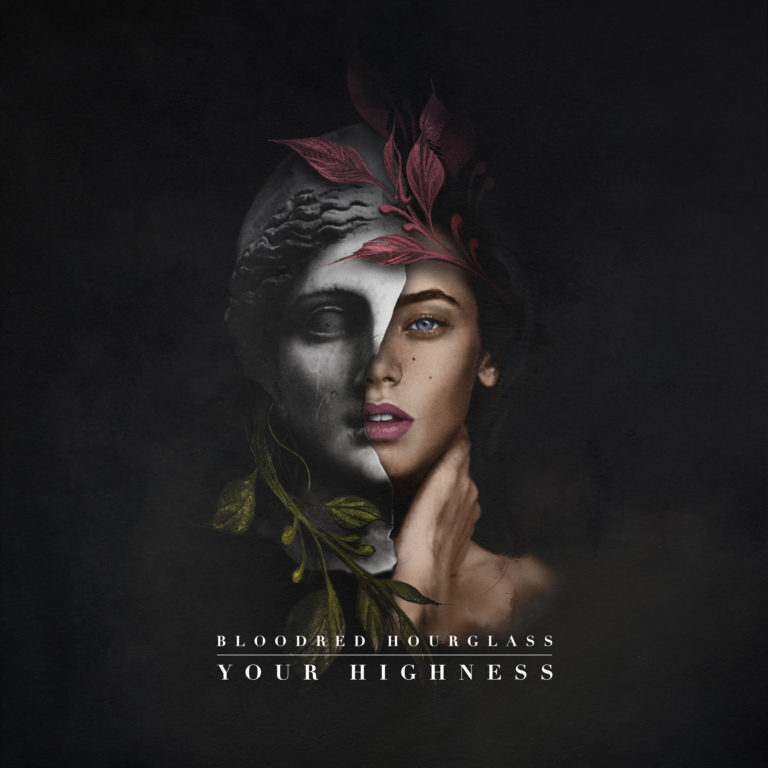 With the unstoppable force of a hurricane Bloodred Hourglass’s new album “Your Highness” (recorded by Juha Räihä, mixed and mastered by Henrik Udd) is about to be unleashed. A brutal storm, a soft cushion, a distorted soul, a celestial beauty – it’s all of this. There is simply no way to withstand it!

The discography of Bloodred Hourglass (BRHG) begins in 2006 when they released their first demo named “Relevant Annihiliation”. The first full-length album “Lifebound” followed in 2012. Its carefree wildness and independent spirit made them stand out from the mass of Finnish Melodic Death Metal bands. The abundance of elements from genres of and beyond metal results in an explosive diversity of harmonic but very energetic songs. Thus, Bloodred Hourglass do not fit into the box of any genre.

Their noteworthiness on a wider international scale was realised when the brutal plot of the video and catchiness of the music for “Valkyrie” conquered the YouTube community and metal hearts. “Where The Oceans Burn” is the referring album, both released in 2015. In a matter of two years they have come up with new albums: “Heal” in 2017, promoted with the powerful singles “Quiet Complaint” and “Last Of Us”, and “Godsend” in 2019. “Heal” hit the metalhead’s soul even deeper, and got them a contract with an international label and shows on several summer festivals in continental Europe.

When other bands in such a situation have faced what seemed critical lineup changes, it represented a nut too tough to crack. Not so with BRHG. With guitarist Antti Nennonen left, their main composer in 2019, Joni Lahdenkauppi – well known from MyGrain – took over the vacant guitarist position. Additionally, their favourite stand-in guitarist and brother of rhythm guitarist Lauri, Eero Silvonen joined BRHG. Three guitars in one band is a statement, a promising one. Their singles such as “Drag Me The Rain” or “Kings & Queens” dropped over the pandemic year of 2021 made that statement a promise they now fulfil with their genius masterpiece album!

From “Leaves” to “Until We Meet Again”

The album comprises of eleven equally strong, however, very rich in nuances and still coherent songs. In addition to the aforementioned singles: “Nightmares Are Dreams Too” and “Veritas” have been released throughout and those teasers made me most curious! This set of four suggested that they had found something I missed more on “Godsend” but also on “Heal”: The carefree wildness and independent spirit not only in single songs but throughout the entire album.

“Leaves” begins with a sort of meditative intro only to break into a melodic, catchy main theme making your feet move a little more. A mild wind growing to a warm storm with an intermezzo that reminds me pretty much of the New Romantic pop songs from the early 1980s. Weirdly enough, this intermezzo connects perfectly with the meditative intro and/or the heavier catchiness of the song.

With the full force of a tornado “Drag Me The Rain” releases the unstoppable beast. There is energy, there is power, there is a force moving your feet and head. Diverse. Heavy. Loud. Moving. Full of esprit! Songs like this and the following “Dreams Are Nightmares Too” command even the laziest couch potato to jump up and obey willingly! And what a statement the title alone is! Then again, it comes with the wish to be proven wrong. Don’t we all long for that – now more than ever?

“Leave Out All The Rest” is a super catchy example of BRHG’s stylistic cherry picking. The intro comes again with the 1980’s synthesizer pop memory and hell, did I really hear Jarkko utter some, I hardly dare say it, clean vocals? There. Again. Sensitive, low, and deep. Wow!

“Veritas” was the first single released. Hidden below heavy, quick guitars, piercingly the keyboards scream supporting the very variable vocals. The very pointed clean vocals ensure that each and every listener is going to understand the message.

Soft and low acoustics introduce “Tell Me About Yesterday Tomorrow”, underlining musically that Jarkko’s lyrics come with a message and momentum. More clear, rather soft vocals sounding sad and disappointed. They chose a smart variation on the common dominance of growls in Death Metal by using a choral of shouts and background growls for the chorus. Slow, acoustic, and clean vocals can still make a heavy and mean atmosphere on a purest metal song. The break follows, only to raise the intensity of rage and disappointment expressed.

I can’t really recall BRHG ever bringing clean vocals before “Your Highness” but then, I have to admit I am not familiar with all details of their early releases. However, the clean vocals on “Your Highness” are well placed, very emotional, and perfectly add to the atmosphere of each song in total and the part of the song they appear in. For example, the plot of “Tell Me About Yesterday Tomorrow” generates all its empathic emotionality from the vocal contrasts underlining the instrumental tunes. Vocals, lyrics, and instrumentals make it an expressionistic piece of art in its fully entity.

“Change Of Heart” is punchy keyboards in the background, catchy, melodic, and full of emotional breaks. These wild keyboards picking up 1980s New Wave and pre-industrial background soundscapes are embedded in the heaviest metal context. This combination has recently become very popular, but pleasantly here it is only one of many stylistic means. This however, is elegantly applied to express the heaviest of emotions such as despair, grief and frustration. Interestingly, many of those keyboard and synthesiser passages pretty much remind me of the Finnish Metal keyboard grand master, Janne Tolsa who (has) played in numerous bands and projects over the last four decades. Those frantic and very intense keyboard lines and backgrounds match and support distorted guitars and blast beats in expressing extreme emotions. The following two songs, “Gone For Now” and “Kings & Queens” show this vividly. The wild mix of stylistic means, such as the rather classical rising guitar tunes or very groovy bass in Gone For Now, or less conventional rapped growls in Kings & Queens, still result in a harmony. The latter by the way rouses the memory of Turmion Kätilöt’s “Grand Ball” in me.

“My Prime Of Kneels” is sort of an early 1980s-New-Romantic hall, filled with an air of what seems to be Sentenced-inspired blackness, illuminated by thundering BRHG energy. It is full of rising evil and darkness, culminating in blanc horrors. It is also a perfect example for the very BRHG way of dealing with breaks. How often have you found yourself bored by yet another very soft, acoustic, or orchestral intro being followed by hell-cut-loose after a break? This is not their way of doing breaks. They set contrasts, yes, but always in a harmonic, balanced but nevertheless harsh and evil manner! There is a rising tune around 3:20 minutes built on the motif from the intro. It is making you wait for a bomb to explode. But the break brings neither that nor the relaxing flow that would alternatively be expected, but a neat, solid, and short bridge to the fade-out. I cannot hide my excitement for this jewel and its diverse splendour, especially of the vocals!

“Until The We Meet Again” is the final and longest track of the album. Its subtle emotionality comes on an amazing bass carpet, with super beautiful extensive guitar solos, intensive moods, and a sophisticated plot. In a way I cannot word, to me it reflects their friendship with multi-instrumentalist Tuomas Saukkonen. This song perfectly highlights the luxurious abundance of three guitarists. Additionally, BRHG have often come up with excessively long songs, especially as closing tracks. They have often allowed their tracks to grow and evolve, avoiding the three minute cage, when the song demands the freedom of a prog symphony. This one makes it hard to wait “Until We Meet Again” – them shredding the stage and the hearts of their crowd.

I have never been a friend of boxing bands in genres and BRHG have made a perfect example of why this often simply does not work. Especially their first full-length album, “Lifebound”, is an impartial mix of elements from many genres of and beyond metal. Any attempt to describe that spectrum in a typical three-words term is bound to fail in my eyes. “Lifebound’s” strength is the energetic if not explosive, multifaceted nature carried throughout the entire album. To me that is what differentiates them from any other! Their musical evolution then focused more on the Melodic Death Metal side of things until now. As with “Your Highness”, they deliver a new album that unites both to make the best of it. Chapeau!

I cannot stop listening to the album. The album comprises of songs that are allowed to develop rather than pressed into a corset of time frames or genres. Although it is no Prog Metal, BRHG and their producer carefully minded the smallest detail without losing any of their energy. They indeed are an expressionistic display of heavy emotions. Super melodic and ultra-catchy tunes encompassed in brutal guitars, heavy drums, and harsh vocals.

“Where The Oceans Burn” was my favourite BRHG album ever since I heard “Valkyrie” for the first time, despite the many incredible songs that followed on “Heal” and “Godsend”. But now there is “Your Highness”, your royal metal highnesses! 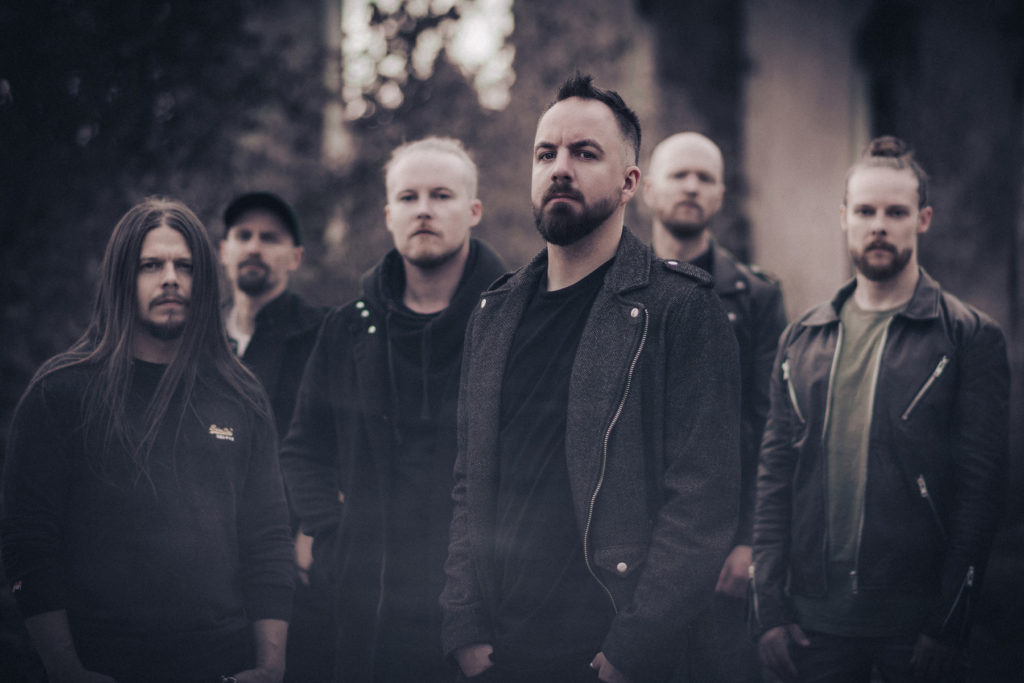