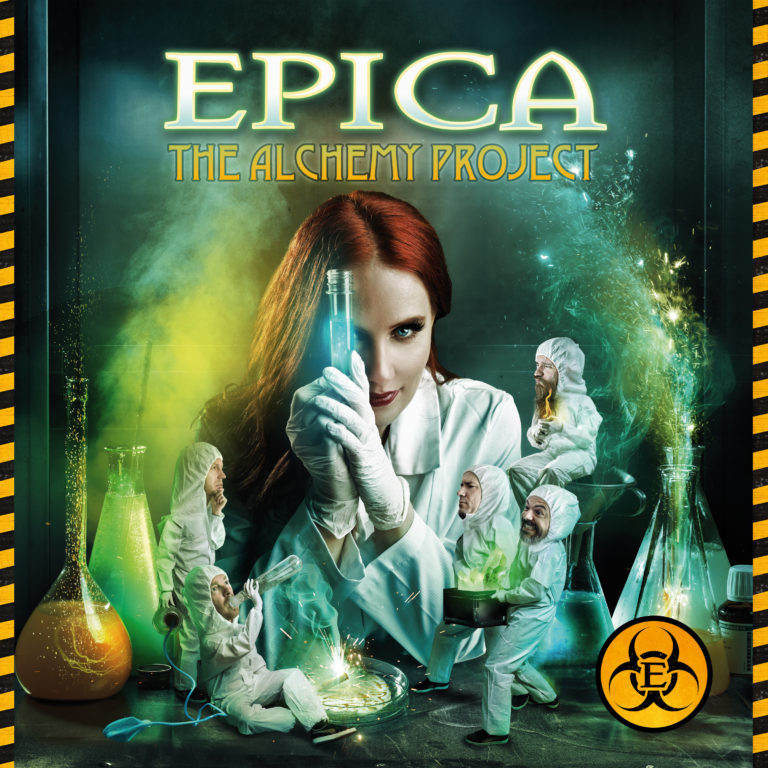 Review by Mummi-Katja and Friend X. aka Mr. Deep

Twenty years of Dutch Epica. Twenty years means eight studio plus five live albums. Twenty years means a Symphonic Metal journey through two decades, influenced by Gothic, Death and Power Metal, and the sugar-sweet vocals of flame-haired Simone Simons waving all over it. So what can we all expect from their brand new EP called “The Alchemy Project”? Alchemy. All-chemistry? A mere project? All but that! Expect a marriage of Symphonic, even operatic Power Metal, harsh Death Metal and an abundance of progressive diversity. Expect some fascinating and inspiring collaborations. Here we go, no more words wasted, we start with the first song.

“The Alchemy Project” – Track by Track

Together with Fleshgod Apocalypse from Italy Epica create this five minutes’ gem. What begins as a kind of typical Epica song soon turns into THE definition of Operatic Death Metal – remarkably rougher than we have ever heard of Epica, not of Fleshgod Apocalypse though. Nonetheless it is symphonic and yes, epic! Harsh and clean vocals underlined by keyboards and a pushing guitar make it a question and answer song to our ears. A choir and piano complete the thrilling atmosphere of this mini opera. This song is roaring and whistling and of ecstatic intense. It comes in the tradition of such outstanding masterpieces like “Bohemian Rhapsody”. “The Great Tribulation” contains everything to allow this comparison. But judge for yourself and don’t blame us for being right, we love Freddie Mercury and Queen too.

Ready for some softer tunes? Back to some golden 70ies inspired melody? “Wake The World” combines outstanding male clean vocals that perfectly balance Simone’s ear candy vocals and this majestic 1970’s Hammond. Phil Lanzon, keyboarder of British Hard Rock dinosaurs Uriah Heep and Swedish Tommy Karevik, vocalist of US-American Kamelot complete the musicians for this song. With his operatic ballad verses Tommy settles an old debt as Simone has a long-standing history of appearances on Kamelot albums. Phil delivers some prog-rock celebrating keyboard lines proving the epic Hammond organ to be all but outdated -50 years after “Easy Livin’”. He breaks the seductive enchantment only to make way for some of Mark Jansen’s great growls. Bearing the extreme metal fan’s point of view operatic and symphonic metal easily can drift into shallow sing along pop tracks or banality. Buffer that with some prog rock era atmosphere delivered by the epic Hammond and one of its most epic wielders is simply clever. It underlines the high degree of imaginative power often missed in the symphonic metal genre. Epic(a) Symphonic Metal in six minutes of perfection.

We all know the cradle will rock with “The Final Lullaby”. We are not sure if any baby on planet earth will ever fall asleep with it but we are certain the baby will rock. This baby will absorb the song with breast milk. Norwegian Avant-garde metalists Shining cross even their own borders to create this masterpiece together with Epica. Whenever did you hear a saxophone solo during a metal song? The lyrics are inspired by the tale of Snow White “mirror, mirror on the wall…”, the chorus is nothing but a high speed chase for the innocent prey, and this time the chase once again is better than the catch. You can’t stop listening to this lullaby – at least it ends with some good night melody. BUT you still want to repeat the song and pull the cord on the baby’s musical toy once again and again and again.

Sirens – Of Blood and Water

Now it is time for a ballad on a completely different level than anything else. However better not mix up ballad with sweetness. Seductive soundscapes can be so betraying, luring into the fatal trap. Sirens, that’s what it is about! Dutch Charlotte Wessels and Danish Myrkur form a vocal triangle together with Simone not from this world. It is pure passion and excitement to listen to these three sirens. We do understand why sailors from all over the world and all through the centuries fell in hopeless love with these mystical beings just to be shattered and drowned on the shores of Aiaia. May The Highest Being, the Old and the New Gods help us to survive the journey through these four minutes without any damage. Or may be a little bit? A bit more damage? Ah, come on, let them give us a bitter sweet death in their arms. You know death is not the end and that’s how we come to the next song.

Death is not the End

A choir in the beginning and all through the song sounds like the angels of death chased by infernal drums. Frank Schiphorst, guitar player of Dutch MaYaN as well as Björn “Speed” Strid, vocalist of Swedish Soilwork and The Night Flight Orchestra are the guests on this fine tune. It is one of the rougher kind, rough enough to wake you up from the death you enjoyed the song before. It gives Simone a bit of a rest and Mark once again proves his skills as a “quite talented” growler together with Björn until she joins them. Some dramatic keyboard interludes and a lovely guitar solo give hope for a glorious afterlife. If there have ever doubts been raised if extreme metal and symphonic can result in great music, Epica and their guests prove them wrong. Actually “Death Is Not The End” is a perfect example that both genres translate the same gut-wrenching emotions into music. It is only logical that both tools in this regard simply fit together.

Henri Sattler, vocalist and guitarist of again Dutch God Dethroned and vocalist Sven de Caluwé of Belgian Aborted speed up everything a little more, they just have barely three minutes to convince everybody together with Epica. And they do. A distorted guitar intro, brutal, crashing riffs and chords, only harsh vocals, infernal guitar solo and galloping drums speak for themselves. Deaf forever and we like it! Leaving the path of one’s own traditions, break with one’s routines essentially requires braveness as much as a distant view on oneself. A surprising turn might polarize. But here it is epic again. Where is Simone, where is Epica in “Human Devastation”? Everywhere!

Sadly, the final song of this EP comes far too soon. It features none less than vocalists Asim Searah of Damnation Plan and Niilo Sevänen of Insomnium both living in Finland. They are accompanied by Dutch drummer Roel van Helden of German Powerwolf. They join Epica and Simone for this crown jewel.  Expect nothing but the best of the best from each of them, you cannot fail. The entire intro immediately gives away Insomnium’s signature. A keyboard tune – in the fashion of Powerwolf’s power anthems and energetic drums open the song, guitars and bass fall in, build up a tension until it is nearly unbearable. Asim’s unexpectedly soft vocals performs the first verse followed by innocent female vocals and take over again. It is not a fast song, nor it is a slow song but it is epic. A very heavy, gloomy, short riff in the background allows a short view into the voids of Death Metal. Epica from its finest. That is what hymns are made of. Niilo’s growls set in only in the second half of the song but are critical to balance the vocals! It adds all one harmony like ebony and ivory on a piano, together as one. If there is a perfect ten, we would give this song a twelve… Any more questions?

Epica “The Alchemy Project“ or The Epic All Chemistry Project

The entire album is nothing less than epic. Epic soundscapes, epic vocals, epic arrangements, epic diversity, epic songs, etc. The Alchemy Project leaves us speechless. It is impossible to judge this EP. What counts for the closer also counts for this whole piece of outstanding art. A perfect ten would not be enough. Maybe it is one of those albums for eternity. Certainly it is the best piece of music we have heard in a while, the best of Epica anyway. The production is setting standards on a higher level. Sure, it is grounded and rounded but it leaves more than enough rough edges for deep cuts and rips. The whole idea of this project is amazing. We don’t have only guest musicians who sing or play down their part and what they are paid for. We have emotions, passion, diversity, friends. We have everything our drained our metal community is longing for.

Opener and  final track perhaps make the best examples to explore the magical process of alchemy. “The Great Tribulation” could easily end up on a Fleshgod Apocalypse album. And the intro of “The Miner” is 100 % Insomnium. And yet both are as Epica as The Alchemy Project can be!

The dictionary defines alchemy as a medieval preform of science classically aiming to turn any metal into gold. In regard of The Alchemy Project: Done and more than that, accidently discovered platinum! Even more the raw materials used here exceed the group of metals in the periodic system of music by far.

This is perhaps the sad news about the whole thing. The album is doomed to remain a project in regard of playing it live or touring with it. It will be quite impossible to tour with all the contributing artists. Really too bad. But let’s dream about it and perhaps hope for a few singular events? Anyway this situation requests another alchemy process namely that of turning the studio versions into live arrangements.

It is Still All about the Chemistry

Alchemy is also defined a process of sort of metaphoric dimension resulting in an extreme upgrade. The song writing comprised a new approach, a switch of positions at times even. Epica wrote songs or parts of songs they would expect from their contributing artists for their own bands and vice versa. That takes quite some open mindedness and in the next step a good chemistry between the participants to merge all the material in one song. Even the production team requires a very empathic working style to highlight the unique of every contributor but still keep the harmony in each song. Take it the epic skill of the master chemist to achieve songs that unite controversial genres and remain bearable. Bearable in a way that none of the song is too big, too much, not overwhelming but catching.

The Approach of the Project

In a very technical sense, any music is sounds written in notes. As such there is a universal language that can bridge genres. Even more there always will be a bridge if you are open to look for it and brave enough to walk on it. Opera and symphony are the extreme music of ancient times. They are story-like transcripts of intensive, even huge emotions played by incredibly large ‘bands’ known as orchestra. They allow the luxury time frame of evening-filling length and a carefully emerging plot.

There is no Difference Really

Death Metal and all the more its extremer subgenres seem quite the opposite but only on very superficial glance. Basically it is a brutally condensed way to express intensive and huge emotions in rather short songs performed by smaller bands. Consequently the difference between opera, symphony and extreme Death Metal is quite small, no more than the use of some other instruments. Join them in one song such as The Great Tribulation from the point of view is nothing but natural.

There is nothing left to be said but: this album is simply epic!

Protagonists On The Alchemy Project