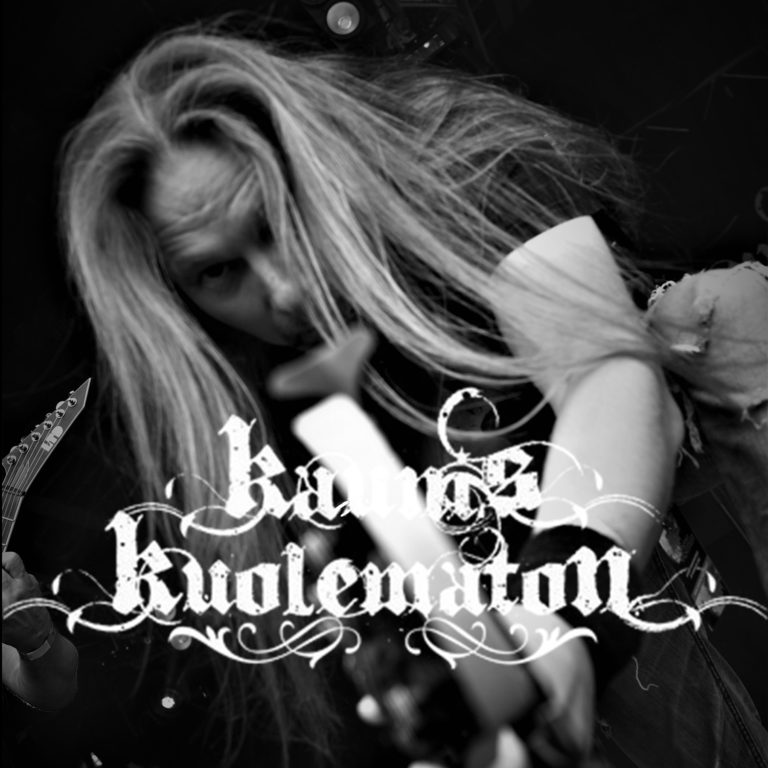 “Because Music is The Language of the Soul …”

Apparently it is impossible to avoid conversations about ‘deep shit’ when meeting Kaunis Kuolematon. Then again their music  is  some of the deepest, so it’s to be expected. They have been working on a new album for some time while facing the virus-induced hardships we know all too well. But unlike most, they have had opportunities to play live, like here on the Dark River Festival where our Mystique met Ville Mussalo (guitar), Mikko Heikkilä (gutar, clean vocals), Jarno Uski (bass) and Miika Hostikka (drums).

“I’m here at Dark River Festival in Kotka, Finland and I have Kaunis Kuolematon with me. This is not my first time interviewing you guys, so let’s get straight to it! You have grown a lot. This is my first time at the Dark River Festival and after seeing you here I must say, it’s the best performance I’ve witnessed from you! And I’ve seen many. It was fucking awesome! I hate asking such a ‘typical’ question, but I will ask anyway. Your new album is coming up, how is everything going with that?”

Mikko adds with a smile, “Everything is going very well, even though it’s delayed. We have a tendency to create very slowly sometimes.”

“How long have you been working on it?”

Mikko: “Well, we started with the guitars in January. So seven months now.”

Miika: “Yes, drum recordings were done back in November 2019.”

Ville: “Slowly works better. We are careful and we always put our best into it.”, he says with a laugh.

“Three of you compose the songs. How does that all work?”

They all casually explain that everything goes smoothly since everyone has a job to do … and they do it. Teamwork!

“Do you have a story behind the album?”

Jarno: “I think we are going into very deep waters with the new one.”

“I have to say that the new songs we heard here were very touching … Who wrote those beautiful lyrics?”

“Alright … Mikko, then I must ask you. What inspired these lyrics?”

Mikko: “Nothing really. Ville did the lyrics to the first songs we played today, by the way.”

Ville adds: “I made lyrics for only one song and Mikko and Olli (Suovanto, vocals) did the rest of the songs.”

“Your lyrics are written in Finnish. How do people abroad respond to that?”

Ville: “We only get positive feedback.”

Miika and Jarno: “People say that even if they don’t understand the language, they feel the music inside them, and they just love our music because of that.”

“Cause music is the language of the soul”, Ville sums up with a smile.

“How did you come up with the idea for the “Kylmä Maa” video?”

Mikko: “We wanted a gloomy place for the parts where we’re playing the song. That’s how Hamina’s Bastion came in. And the other parts were made in a former papermill, built in the 1930’s. It burned to ruins and nature is growing around it. We wanted that as it fits with the song’s title.”

“You are working with a booking agent now. How has that changed things?

Jarno: “Many more yes, and they are bigger!”

The entire band says – with smiles – that they are very satisfied with their new agent. He seems to be doing great work.

“Now to everyone’s favourite topic: Coronavirus. Everything is such a mess these days. How do gigs feel right now?”

“Does the world ever piss you off?”

All the guys say no! But then Jarno has something to add…

It’s not the world that makes me upset. But people do.” (Jarno Uski)

“People don’t usually like to think of the future. But I need to ask, how do you see it?”

Jarno: “There is a Covid-19 vaccine in the making and things are going into a new form of normal, so to speak. Whatever it’s going to be, nothing will be like before. But it’s coming.”

Mikko: “I think that people are gonna be much more careful now. Gigs are gonna change and people might be scared to go to see live gigs.”

Jarno: “Further planning is needed somehow. Advance tickets for sure and people won’t be buying as many. People are gonna live more in moment, that’s for sure.”

“You are all bad humans in the end” (Mikko Heikkilä)

“Mikko, you said in the middle of the gig: “You are all bad humans in the end.” Why do you say so?”

They all mumble something at the same time. At the root of it, it seems to have come from Mikko’s own perspective on life.

So Mikko explains: “Hmmm … Just saying that in life people always say they are changing ‘cause nobody ever likes themselves. But bad humans are always bad. And the lyrics in “Paha Ihminen” mean that no matter how much you try to change, you will always be your bad habits’ slave. ‘Cause it’s always a part of you. Your thoughts could change, but you can’t change who you really are inside.”

“Are you ever too tired to create music?”

Mikko: “The break time was good. Now we can move forward with renewed energy.”

Ville and Jarno: “Not tired at all, cause we have a good group! The energy in the band is positive.”

Together, the band explained that it’s why they don’t get fed up of each other. Sometimes they may disagree, but everything is usually sorted out nicely.

“What about Mikko’s and Olli’s other bands. Does that clash with you guys?”

Everyone says no and Miika goes on to say that the varied styles actually enriched Kaunis Kuolematon’s music.

“Now we have to say goodbye, unfortunately. Any greetings for our readers?”

Ville: “Hope we see you someday out there!”

Jarno repeats smiling: “Music is the language of the soul.”

Mikko: “We are getting so many greetings from them … Thanks and glad you like us!”
“I just play drums!”, Miika says laughing.

“Guys, thank you so much. It’s been a pleasure as always to see you and have this interview! It’s always such a fun time.”

They all thank me with enthusiastic smiles. What a lovely band!

Once more, Kaunis Kuolematon have triggered a pile of thoughts. It’s not the world that pisses one off, but the people do. And perhaps this is because, we cannot change who we really are deep down inside! The more I venture out of my protective shell into the virus-contaminated world, the more I agree with Jarno.

The world, our planet Earth is as beautiful as ever. But human greed, ignorance and egoism are omnipresent. Those have always been the most destructive threats to our world and the conditions enabling us to live on planet Earth. Yet they have increased in order to improve our lives, technology and supplies.

In 2020 a foe of less than microscopic size that is nothing without a host, teaches us how arrogant mankind was to think we could rule the world, control everything, and redesign planet Earth to fit our needs. This invisible force shows how fragile we are. It feasts on our greed, ignorance and egoism to destroy the very life it needs to survive.

What does it remind you of? Yes, the virus acts just the way humans have always done. In order to survive it kills who or what provides the conditions it essentially relies on! Isn’t that cynical?

We are our bad habits’ slaves.

Granted. As long as this remains true, the archaic fight between light and darkness, good and evil will continue. Kaunis Kuolematon provides the soundtrack to our misery. The bottomless darkness, the void, the evil resonates in their heavy tunes and harsh vocals. Then a ray of blindingly bright sunlight breaks through the clouds – Mikko’s clean vocals. Perhaps a metaphor for Miika’s incredible optimism for the future.