Meeting a legend – that’s what I hoped for. And I met a man that fully qualifies to be called a legend. Although perhaps he even more is a wise one.

But let’s go back to the early days: A Metal band called Anvil rises from Canada in the late 1970s and very early 1980s. Harder and louder and … faster than ever. Thrash Metal is born. But then a bit of bad luck forces the band to take a break when the nowadays incredibly big mega-sellers like Metallica rise. No reason ever for Steve “Lips” Kudlow and Rob Reiner – the heart of Anvil – to give up. Today, more than fucking forty years later they are still there. And Lips tells us all about the critical moments the band has had and how in the end everything fell into place. Even more he gives a hell lot of good reasons to enjoy the days we have.

We meet backstage but with the support bands doing their sound checks it is too loud by far. So we change to a cosy corner in the café bar of the venue. Anvil has been on the road for two months already and will be for another three weeks. But then the tour has been “Lots of fun! One of the best tours I have ever done!” Lips says. He explains how touring as support of UDO about two years back brought a lot more exposure for Anvil.

40 years. That’s so long, to me. But Lips, he laughs: “Oh, I don’t really think about it as a long time. When you’re busy it isn’t a long time.” He turned 50 when the documentation was produced and that is already twelve years back. “Yeah, I am 62 now!” he says with a smile. “Goodness!” Impossible, I think.

“And you look brilliant”, I admit frankly and with pleasure. “Well, you age because you’re doing bad things.” Lips relates to alcohol and smoking as aging factors in life: “It gives you wrinkles and cancer and everything else, so”, he laughs again, “if you gotta do something bad you’re probably better off smoking pot.” I frown reminded on the smell in the room we met first. [When the support bands played later I got an idea who might have caused this scent in the air, btw.] “… than drinking or smoking cigarettes. But obviously the best thing to do is doing lots of exercise, eat properly and don’t do any drugs or alcohol. Then you’ll be ok”, he says laughing softly.

The Beautiful Thing About Anvil’s Career 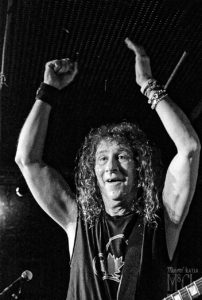 Was there any particular moment from which on things go better? Could you over such a long career determine such a critical moment? “Well, I mean, obviously” … – but then he is reconsidering his wording and starts over: “The beautiful thing about Anvil’s career that it happened exactly the way that I envisioned, that I planned it at the very start. I never wanted to sell out, to be as big as Metallica. I never wanted that. Quite frankly, I still don’t. It’s not my idea of what a Metal band should be. A Metal band should stay true to what it’s hoped to be or what it was in the beginning and stay consistent on the road of its career and not become so big that you become everybody’s favourite. Because if you become everybody’s favourite it doesn’t take long before it’s over. And if you gonna have a break-through album, do it on the 20th or 25th album! So that when it happens there’s 25 albums to buy rather than just one.” Lips’ attitude is bone-crushing and as down-to-earth as can be. I can easily read in his face that this man is absolutely happy and confident with his life and the moment. What he says, it comes from his heart. No doubt. “You gonna make it, you make it on the first album? That’s not so good. You only got one record. Only one record to tour. One record to be known by. You’re better off when you sell out with change and adapt and the world is gonna tapping to what you’re doing – you want it to happen when you got lot s and lots of music!”

He wants to tell this story. I hardly need to ask him anything. “And much experience…” – “My theory about life is, you wanna get as much done as possible. That’s who wins. It’s not the person who gets the most amount of money. It’s the person that knows the most people, the person that’s been to the most places and the person that’s created the most music.” I draw a breath to begin … but Lips continues: “I mean in my humble opinion, it’s my opinion and I don’t really care what other people think in this sense, I am a lot more successful than The Beatles! I’ve done 17 albums! And I am gonna continue maybe another three or four so … I’m gonna get 20 albums with over 230 songs – lots of music that I have published and all put out. That’s a winning score!”

I point out that he still has the privacy to live a normal life which I personally consider an extremely valuable feature of life. Lips fully agrees with me and ends with: ”I am extremely content with what I have achieved.”

Lips – The Traveller and His Very Socio-Political View on America

“Do you have a favourite place in the world – besides home?” -“No. It’s sort of difficult to answer that because each place has its own beauty and its own attractiveness to me.” Lips explains that he loves, for example Germany and England but that he would never want to live anywhere else but Canada. It’s home and “that’s where you grew up. That’s where you’re comfortable, you know. Is it the best place in the world? I don’t know.” He smiles and his smiles grows more intensively saying: “If you’re Canadian, it is!” We both laugh.

Images in my mind of boiling heat in the Outback crash into biting frost of Canadian winter as Lips highlights that Canada and Australia have so much in common and I say: “But very much warmer?!” “Well in the North of the country, yes. But in the South it’s not much different in Canada. …” He illustrates the similarities that he sees in architecture, the distribution patterns of the inhabited areas of both, that they’re rather young countries. Still my associations have always been different, what makes it all the more interesting. “I think one of the most different places in the world is America! And all they like to think of themselves is being the most common and the best in all there is.” Ok, I think. “There are similarities to America and Canada, of course. We’re all North American and the similarity of architecture and they don’t have the ancient architecture like Canada. But the way of life and the way of or the general attitude is NOT the same! Canada is much more in line with Europe, Australia, even Germany for that. You know, America is much more struggle worrying. They don’t have a social safety net at all.” Just like for us here in Europe the idea of no social security, lacking health insurance is totally strange to Lips’ life. “You don’t worry about things like that. And that’s what I think makes America more different than anywhere else in the world. The effect of that has it perturbations on everything. So that’s why I am saying that probably of all places in the world America is the most different.”

I Could Have Become A Doctor, A Lawyer, An Accountant 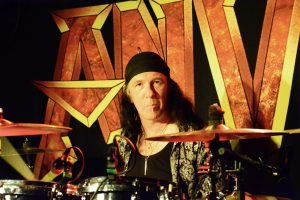 “How do you keep the passion and drive over that extremely long time and despite all obstacles and difficulties bands have to make a living from their music?” – “Well the thing is how you prioritize your life. If you make band responsible to make a living, you’re gonna fail. You can’t have that attitude. You can’t go in with the attitude: ‘Oh I’m gonna live of music.’ No, you’re not! No one lives off their music! Virtually no musician lives of their music. And you gotta set up your life in such a way that you can get away with doing music.” I frown – that’s interesting. “But you gotta make your money elsewhere. Yeah, he replies to my comment. If you don’t you’re gonna fail. And to be honest with you, here I am, some 40 years doing this and only in the last five years am I making my living from my music.”

I swallow. It is a different thing to read stuff or to speak of it with someone who lives the situation.  “That’s a really, really long way to go.”  – “It took my 35 years to actually make a living from Anvil. So what I am saying is I never depended on Anvil to make me my money. That’s why you saw me in the movie working for a catering company. And before the catering company I worked for a fish company, I worked for a florist. I have always had to have other jobs to make my money.”

I reply that that’s the story I learned from others, too. “Well of course, there is no other way. There is no other way and that’s what I mean by prioritize. There are other things in life that can make you money. Some of them are not so savoury. And some of them are not legal. But whatever it takes you do it so that you can do your music. The music is your priority. I could have gone and worked for my younger brother and become a property manager and make thousands of dollars a week. I could have gone to school to get my degree in something and maybe become a doctor, a lawyer, an accountant like my brother and my sister and whatever. I chose not to. I chose to do music. But having said that in order to do that means I had to give up the possibility of making really good money and I had to take manual, physically, hard-labour jobs. But everything has a positive and a negative. By taking the hard- labour jobs I’m 62 years old and I look like I am 40. Ok, why? Because I did physical labour all my whole life and kept myself in top physical condition. So these are the positives and negatives. Having said that but by not depending on Anvil and not putting my eggs in one basket I was able to raise my family, pay for a house.”