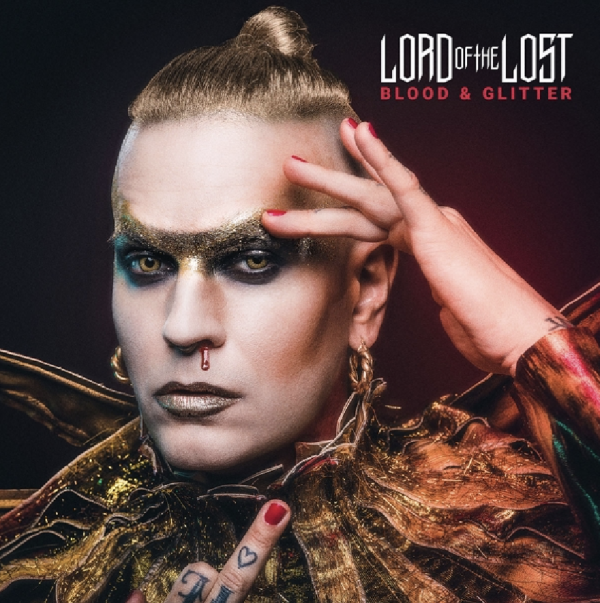 The last days of 2022 surprised us with an unexpected album release. No big marketing campaign, neither pre-releases of singles, nor videos. Nothing but an inconspicuous announcement to expect an extra gimmick if you buy a ticket box for the Small-Club-Tour in February 2023. This is exclusive tour is limited to five venues with capacities below a maximum 500 people. The band we are talking about is Lord Of The Lost. The gimmick we are talking about is the album Blood and Glitter. It would officially be released on December 30th 2022 and those who bought the ticket box would receive it included short before around Christmas. One week after the release the album would hit the German album charts on position number one… Who needs marketing?

Beyond of any box

The statement of Lord Of The Lost was to give a sh*te about marketing strategies, chart positions, sales and the usual mechanisms for an album release. Lord Of The Lost just wanted to release the one album they wanted to make. Recordings already start early in 2022 in Helsinki to be continued whenever there was time. This already is not to be pressed into any marketing schemes.

Of course all the True Metal fans reacted as expected “It is no metal anymore.” or “It is pop music!” Of course Lord Of The Lost have never been a true metal been. They have always been the multi-genre artists whose work cannot be consigned to any pigeon-hole. Why should they change their attitude out of the sudden?

So what do we have? – Honesty!

“Blood and Glitter” contains 12 songs plus one bonus track. Each song is far from being a foul compromise to please anyone. Each song reflects the personal tastes of the five musicians and even more everybody around the band who makes the inner family of Lord Of The Lost.

The lyrics of the songs are sometimes very sarcastic. They are very honest. They are very directThey are far away from mainstream ‘chewing-gum’ songs. They are very Lord Of The Lost – no compromise. Titles like “Leave your Hate In The Comments” or “No Respect for Disrespect”, “Destruction Manual” or “Dead End” speak for themselves.

Instrumental-wise, we hear heavy guitars, industrial guitars, gothic influences and a good portion of keyboards in a very 80ies and 90ies manner for the good of the album. Everybody who knows Lord Of The Lost will understand the reasons and why it is no treason to True Metal nor themselves. It is just the reflection of their personalities, nothing less, nothing more.

The League of Extraordinary Features

The album features additional guest musicians. Some are part of this family, four are friends from other bands. One of these friends is Marcus Bischoff of Heaven Shall Burn on “The Future Of A Past Life”. Another one is Combichrist’s Andy Laplegue on “Reset The Preset”. ”Save our Souls” features Ally Storch of Subway to Sally. My personal highlight is to be found on the bonus track…

The bonus track is nothing less than a cover version of his favourite song of one of Chris Harms’ favourite bands. For ages I have hoped Lord Of The Lost would cover a song of this Swedish band. Finally my wish has come true. The band we are talkingtalking about is Roxette– may The Highest Being bless Marie Fredrikson forever,  R.I.P -, the song is “The Look”, the one which granted Roxette immortality.

And the (not so) surprising guest vocalist

The guest vocalist featured on this track and taking over Marie’s part is Jasmin Wagner, may be better known as Blümchen. She was one of the most famous German Happy Hardcore and Eurodance singers in the 90ies. I fully understand why Chris wanted her to perform the song together. “The Look” itself is close enough to the original to be identified as Roxette’s song and yet far away enough to become Lord Of The Lost’s own version. It is just perfect magic and I really hope it will be performed live together with Blümchen whenever it is possible.

These new songs will come to stage life during the already mentioned Small-Club-Tour which already has been sold out for quite a while. I am curious on which next level 2023 will lead Lord Of The Lost after an extremely successful year 2022. We saw the Ensemble Tour in spring. There was the tour as support of Iron Maiden and the Killer Fillers and there was the more or less sold out Homecoming Tour in autumn. Lord Of The Lost show the whole entertainment industries and mainstream labels that sustained success comes from hard work, talent and more hard work rather than by TV casting shows and One-Hit-Wonders.

Good Luck for the further future. Go your way or no way as you did in the past years! You certainly are no cheap flitter but pure gold.

Leave Your Hate In The Comments

The Future Of A Past Life (Feat. Marcus Bischoff)

No Respect For Disrespect

Save Our Souls (Feat. Ally Storch)

Lord Of The Lost