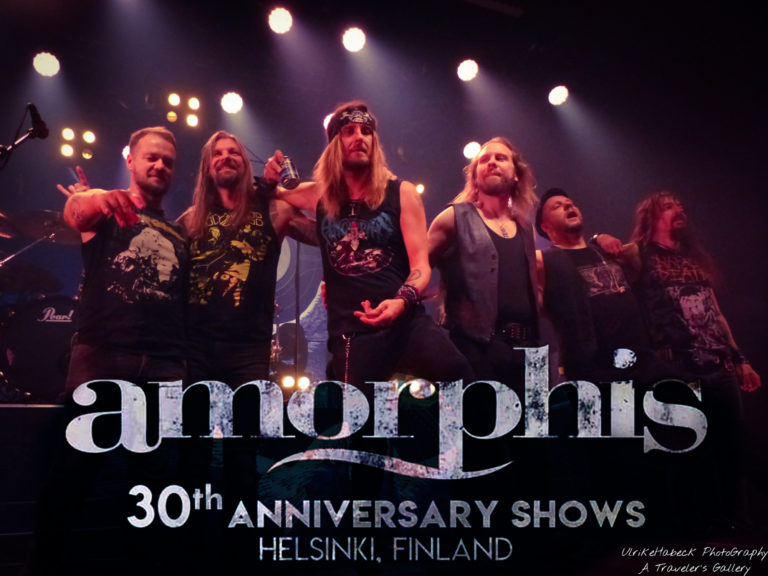 Amorphis, Tavastia And The Thrilling Double-Triple

Attending an actual concert alone makes for a pretty good reason to celebrate in 2020. But attending an Amorphis 30th anniversary triple-show, celebrating their 40th show in the legendary Tavastia, that celebrates its 50th anniversary, makes it super special!

Still, 2020 does not allow celebrating in the traditional way. Despite that, Amorphis made it on stage and played three mesmerising shows in front of an very present crowd!

Let’s take a short walk through 30 years of band history and share the experience of the anniversary shows.

A Glimpse of the Amorphis History

Nevertheless, the history of Amorphis and Tavastia goes back even further. Being allowed on stage here was, back then, a major success for any band! The “Amorphis Biographie” (by Markus Laakso) tells the tale of Esa Holopainen walking right into the owner’s office telling him Amorphis were now fit for his club. Apparently he agreed, because on January 15th 1993 they played their first gig in this temple of heavy music. It was a support gig and, for the first time ever they actually got paid for it!

“Disment Of Soul” was the first EP Amorphis released in 1991. They wanted the production to sound dirty and raw, which was not exactly to the liking of their producer Timo Tolkki. The direction extreme metal followed in the late 1980s and early 1990s was in contrast to the highly polished sound of his own band, Stratovarius. The ideas of including folk and other progressive elements in their songs grew from “The Karelian Isthmus” to the legendary “Tales From The Thousand Lakes” in 1994. Soon they toured all over Europe and even North America. 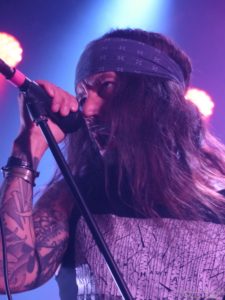 Many songs on this set list have always remained on stage. There has hardly been a concert without “Black Winter Day” or “My Kantele”, for which they have come up with plenty new interpretations.

The 10th anniversary marked a difficult year but the close connection with their friends from Kyyria, who split, proved helpful. Olli-Pekka “Oppu” Laine left the band and Niklas Etelävuori joined without hesitation. Kim Rantala (keyboards) had sneaked away earlier and Santeri Kallio stepped in. After three keyboardists on the first three albums, the band hesitated to fill the position permanently until 2000.

The middle decade was perhaps the most challenging for Amorphis, as several breaks happened. The first two albums of the decade “Am Universum” and “Far From The Sun” fix a break with the harsher style from the early days. The line-up changed nearly completely with Olli-Pekka, Pekka Kasari (drums) and Pasi Koskinen (vocals) leaving the band but with Jan returning. Searching for a new vocalist resembled a marathon. With Tomi Joutsen on the microphone yet another era in terms of style began, leading to their recent sound. Songs like “House Of Sleep” and “Silver Bride” that have remained on the setlists ever since. 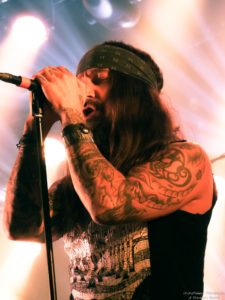 The 20th anniversary was celebrated with a couple of anniversary gigs, two of them by the way, in Tavastia! All former band members joined the gigs in Helsinki: Kasper Mårtenson (keyboards), Olli-Pekka Laine, Pasi Koskinen, Pekka Kasari, and Ville Tuomi, who performed the clean vocals live and on the first albums. In Tampere, even their old friend Jussi Ahlroth (Abhorrence, bass player) came to play “Vulgar Necrolatry” with them.

The setlist comprised songs from the albums “The Beginning Of Times” to the latest one: “The Queen Of Time”. It reflects the decade in which Amorphis established themselves in the professional business and sailed on most “Silent Waters” in terms of line-up. When Niklas Etelävuori left the band, Olli-Pekka returned to reunite the founding formation plus two. Touring with Nightwish and Volbeat granted access to a lot of new fans. 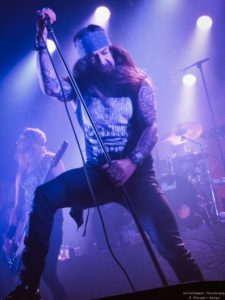 – if for no other reason (and there are plenty), then for simply making the shows happen! After running in circles of planning, postponing, hoping and waiting, adjusting and planning again, it still took an extra-large portion of luck to get the shows running.

Then again, Amorphis have never been too shy to mark special occasions in their own fashion, such as the many New Year’s Eves gigs they played. “An Evening With Friends” was their unique gig during the Helsinki Festival in August 2017, featuring Anneke Van Giersbergen (vocals), Sakari Kukko (sax) and Pekko Käppi (jouhikko). In the very beginning, on August 23rd in 1991, they played a show with a legendary line-up. Only few would know the bands: Demigod, Impaled Nazarene, Beherit, Belial, Sentenced and Black Crucifixion (Day Of Darkness in Oulu).

Amorphis played an incredible number of shows in the past years. The months-long break in 2020 was perhaps the longest break they had, even if you sum up the breaks over the last five years. The growing dynamic of the virus situation in October set a question mark on getting the shows done at all, because it seemed to be rather safe in September. So, when they had to consider playing double shows, it was no problem to make it happen. 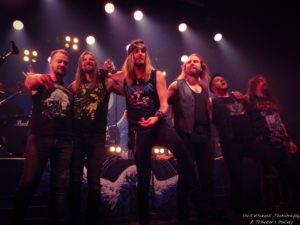 Social distance was achieved by separating standing front rows from sitting patrons. The latter were in small groups on bar stools. There was also a limited number of attendants, sanitiser  provided and face masks required, plus a mandatory digital tool for optional contact tracing, and extra-long entrance and exit slots enabling the venue to close doors at 23:00 h.

Compared to most of Europe, ‘quasi social distancing’ in Finland seems sort of normal. It has always been perfectly normal not to hug or shake hands with anyone, or standing 1.5m away from each other in a conversation!

Experiencing The Triple From The Front Row

Ulrike Habeck attended the shows and shares her experience here. Amorphis invited their fans to follow them back into the band’s history. The first show reflected the third decade and consequently the last concert covered the early years.

“The first show covered the time of my favourite Amorphis album which is “Under The Red Cloud”. The setlist was great as was the atmosphere, although perhaps a little weaker than during the other two shows.

Albeit the second gig seemed to have the least number of attendants, I found the atmosphere the best. The setlist surprisingly contained many of my favourite songs of that decade, from which my second favourite album comes: “Skyforger”. I think what made it the best show for me was that the band-crowd dynamics were even more intensive than in the other two shows.

I heard about Amorphis only in 2016 but then: ‘BAMM’ they got me. Completely! Despite not being a fan of the first hour, “Black Winter Day” and “My Kantele” range among my all-time-favourite Amorphis songs. The third gig was absolute captivating!”

“For months, I haven’t felt as alive as during these three shows! Additionally, I have to say that I have always felt safe in terms of infection risk. The crowd on all three days – I attended the evening shows – behaved very civil and very metal at the same time. Really cool! Finally, I was in an actual concert again! Face-to-face! We were, interacting with the musicians on stage, and each side was giving feedback. Once the show began, the mask disappeared. I was wearing it but I just didn’t notice anymore, although it glued wet on my face.

The band was super happy to be on stage again. You could see that clearly! They were sticking to their traditions, like Tomi Joutsen and his signed sticker giveaways!”

Ulrike adds: “Live-streaming shows is ok and it’s a good way to support bands! But it’s not the same feeling that we all long for! The intimacy is missing. There is no group experience and no interaction with the band while they play!

The spellbinding power from stage felt amazing, like a normal show. You wouldn’t even miss the mosh pit, which of course did not happen.”